Kaolinite is a non-metallic mineral, mainly composed of kaolinite, halloysite, hydromica, illite, montmorillonite and quartz, feldspar and other minerals, often mixed with pyrite, limonite, anatase, quartz, chalcedony, alum, etc.
Kaolin is widely used in ceramics, paper, rubber, plastics and refractory industries due to its excellent processabilities such as plasticity, cohesiveness, sinterability and fire resistance.
There are three main types of the genesis of kaolin deposits: weathering, sedimentary and hydrothermal alterations.

The kaolinite dry mining process is a simple and economical process. The ore is crushed to 25.4mm by a hammer crusher and fed into the cage mill to reduce the particle size to 6.35mm. The hot air in the cage mill reduces the moisture of the kaolin from about 20% to 10%.
The crushed ore is further ground by a blown-type Raymond mill equipped with a centrifugal separator and a cyclone. This process removes most of the sand and the product is commonly used in low-cost fillers in the rubber, plastics and paper industries. When used in the paper industry, the product can be used as a filler in the filler layer with an ash content of less than 10% or 12%. At this time, the brightness of the product is not high.

When the dry beneficiation method requires high whiteness of the product, the product produced by Raymond mill must be dry iron removed. The dry process has the advantages of eliminating the dehydration and drying process, reducing the loss of ash powder, short process flow, low production cost, and is suitable for drought and water shortage areas. However, it is necessary to rely on the wet beneficiation process to obtain high-purity kaolin.

The prepared slurry pulp is first desanded by the rake type washing box, floating tank classifier or cyclone, and then divided into two grades of coarse and fine by the continuous centrifuge, hydraulic cyclone, hydraulic separator or vibrating fine sieve (325 mesh).

The fine-grained grade of the classifier is fed into HGMS (high-gradient magnetic separator) to remove iron-titanium impurities. The product is detached by stirring and scouring and then leached by iron oxide. The clay which is high enough in brightness and has good coating properties can be magnetically removed. Stripped and sent directly to the leaching operation. After leaching, alum is added to the slurry to coagulate the clay minerals to facilitate dehydration.

The bleached clay is dewatered using a high-speed centrifuge, a rotary vacuum filter or a filter press. Dewatering by filter or filter press. The filter cake is redispersed into a slurry of 55% to 65% solids and then spray dried to make a loose dry product. Part of the dry product was mixed into the dispersed slurry to make 70% solids and shipped to the paper mill.

The final product, which is not selected, has low brightness and can only be obtained by magnetic separation, froth flotation or selective flocculation in the process. However, these independent operations have their own advantages and disadvantages, so the industry usually uses a combined process of two or three of these processes for the comprehensive utilization of clay resources.

Since some iron impurities in some kaolin mines exist in the form of silicates, the magnetic properties are very weak, and titanium exists in the form of rutile, the magnetic separation method is difficult to work, so the process is usually accompanied by flotation, selective flocculation and other operations. To improve the quality of the product. 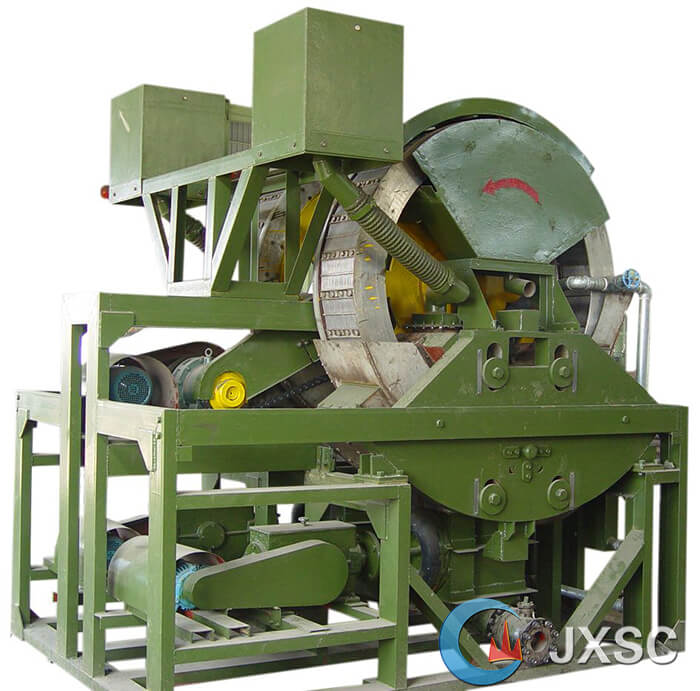 In recent years, superconducting magnetic separators have been successfully applied to kaolin sorting, which not only reduces energy consumption, but also greatly increases the field strength, and the quality of kaolin concentrate is also higher. The Eriez superconducting magnetic separator features a rapid magnetic lift, achieving the highest design field strength (5T) in 60 seconds, while the degaussing time is short, which greatly reduces the time required to flush magnetic impurities from the magnet during the load cycle. Its energy consumption is low, about 80% less than conventional magnetic separator, and the processing capacity is large, up to 100t/h.

The United Kingdom has tested a reciprocating helical superconducting magnetic system that is similar in design to a conventional can magnetic filter, except that it retains the superconducting magnet in an excited state during the duty cycle without switching control. Continuous operation. The 3048mm superconducting high gradient magnetic separator designed by Humboldt of Germany has simple structure, low operation and maintenance cost and good stability.

The agents used in the flotation process include dispersant sodium silicate, pH adjuster amine hydroxide and caustic soda collector Tal oil, fatty acid and calcium petroleum sulfonate. However, flotation has many disadvantages. The hydrophobization of the carrier requires a large number of chemicals. The flotation process can only be effective at a lower concentration of the slurry, thereby increasing the cost of dewatering. The loaded body must be removed from the clay product as much as possible. Recycling in the product for recycling.

Chemicals and carrier minerals remaining in the clay are detrimental to the final product. Cundy and Yong et al. studied a flotation process that does not require a carrier and floats anatase directly from kaolin, which is characterized by the presence of dispersants (such as sodium silicate) and pH adjusters (usually amine hydroxide). Under high conditions, high pulp concentration (40% to 60% solids) is scrubbed to remove surface contaminants. At the same time, scrubbing also disintegrates anatase and hematite from kaolin minerals, and then traps a small number of activators and fatty acids. The slurry is added together with the slurry, and the anatase covered by the collector forms selective agglomeration under high shear stirring conditions, so that the particle size is significantly increased, and the slurry after high shear stirring and slurry is diluted to 15%~ Flotation is carried out with 20% solids, and alum in kaolin can also be removed by flotation.a
You may interest in buying flotation machine, 7 Factors Affecting Froth Flotation

At pH 8~11, selective agglomeration of iron-titanium impurities was observed by adding alkaline earth metal ions such as Ca2+ and Mg2+ to the kaolin slurry, and then selective flocculation was carried out with a weak anionic polyelectrolyte. The process requires a slurry concentration of less than 20%, so a large amount of moisture must be removed in subsequent operations, and the residual flocculant also affects the quality of the final product.

Selective flocculation of kaolin with high-molecular flocculant, the kaolin particles flocculate to the bottom, and the iron-titanium impurities are reddish-brown in the suspension in the upper part due to the fine particles, and the upper suspension can be removed. Most of the iron-titanium impurities are removed and processed by other operations (such as magnetic separation) to obtain high-quality kaolin. Suzhou Kaolin Company has achieved good indicators using a new process of selective flocculation. The use of selective flocculation and high gradient magnetic separation to treat kaolin also obtained satisfactory indicators.

Leaching is carried out in the presence of a weakly acidic solution (pH 3 to 4) in the presence of a reducing agent (NaS2O4) to keep the dissolved iron in the Fe2+ state, avoiding the formation of Fe(OH)3, and washing it with water to separate it from the kaolin. In order to remove the dark organic matter, it can be bleached with a strong oxidizing agent (hydrogen peroxide, sodium hypochlorite, etc.), and the Suzhou Kaolin Company has obtained high-quality kaolin products by oxidative bleaching. It has been reported that the treatment of kaolin with microorganisms can significantly improve the quality of the product.

The selected clay is stored in a slurry tank for 6-8 hours, and the pH is adjusted to 3-4, which is close to the zero points of the clay, so that the clay particles are easily agglomerated. The addition of alum to the pulp helps the agglomeration of the clay particles and promotes dehydration. The cylinder filter is a commonly used dewatering device which increases the slurry concentration to 55% to 60%. One of the important functions of the filtration operation is to remove chemicals from the clay.

To enhance this work, the water spray is often used. Spray drying has become a very effective process in the clay industry, but it is expensive. In recent years, a new filtration process utilizing the electrophoretic properties of charged particles in an electric field has emerged. The kaolin particles are negatively charged at pH > 3 and are surrounded by an oppositely charged ion mist to form an electric double layer.

The comprehensive kaolin mineral processing technology in the country has the following characteristics:

1 The raw ore mined from the mine is coarsely selected on-site, and a large number of tailings are discarded in the mine. This not only solves the filling of the goaf but also reduces the stockpiling and transportation of the ore in the ore dressing plant. Concentrates of each roughing plant;

2 Pipeline transportation is generally used between mines and selected plants. Since 1939, kaolin slurry has been transported by pipeline;

4 In addition to the hydrocyclone classification, the beneficiation operation also uses a centrifugal classifier, a sand mill, a high gradient magnetic separator, and a flotation machine to improve product fineness and reduce impurities such as iron, titanium and sulfur;

5 The chemical bleaching process is commonly used in major kaolin producing countries such as the United States, the United Kingdom, and the former Soviet Union to produce high-whiteness kaolin products, but the cost is high;

6 Kaolin products are sold in bulk, coarse powder, fine powder and paste form. The manufacturer supplies different products according to the requirements of the users. There are many types of drying equipment for the products, but most applications are spray drying, because the cost is relatively low;

1 The carrier flotation process makes it possible to select fine-grained kaolin. The advantage is that the kinetic energy of the particles is increased, but the consumption of the agent is high, and the use and processing cost of the carrier mineral is further increased.

2 The activation of polyvalent cations without a carrier can also cause anatase to float, but the consumption of fatty acid-matched collectors is higher than that of other industrial minerals, which may be due to the large surface area of ​​the particles.

3 High-shear agitation plays a two-fold role in the flotation. One is to dissociate the anatase from the kaolinite, and the other is to induce shear flocculation between the anatase particles covered by the collector.

6 Electrophoresis/electroosmosis dehydration process to increase the slurry concentration to about 70%, and the production cost is much lower than spray drying.

The combination of 7 kinds of operations and the final product are the main features of the kaolin mineral processing process.