Fura Gems Inc. is a gemstone mining and marketing company which is engaged in the mining, exploration and acquisition of gemstone licences. Fura’s headquarters are located in Toronto, Canada and its administrative headquarters are located in the Gold Tower, Dubai. Fura is listed on the TSX Venture Exchange under the ticker symbol“FURA”. Fura is engaged in the exploration of resource properties in Colombia and owns a 76% interest in the Coscuez emerald mine in Boyacá, Colombia. Fura is involved in the exploration and mining of sapphires in Australia through its 100% interests in two mining permits (EPM 25973 and EPM 25978) and three mining licences (ML 70419, ML 70447 and ML 70451), and rubies in Mozambique through its 80% effective interest in four ruby licences (4392L, 3868L, 3869L and 6811L) and its 100% interest in ruby licence 5572L.

Fura Gems is the first public company with a project in the world-famous Colombian Green Emerald Belt in the Boyaca region of the country. In Colombia, Fura owns a 76% stake in the historic Coscuez emerald mine, which has been producing for over 400 years and has yielded some of the most expensive precious stones in history. The presence of very high value stones is what attracted Fura to the region, as the company is set to be the first miner to apply modern underground mechanised mining techniques to the extraction of Colombian green emeralds.

Coscuez Emerald Mine (license 122-95M) is currently the most advanced asset within the Fura portfolio. The asset, 76%-owned by Fura, is located in a world-famous emerald corridor, the largest emerald producing region globally. The Coscuez emerald mine has produced some very renowned pieces such as the 1,759 carat Guinness Emerald.

Coscuez is a fully permitted underground mine, located in the San Pablo de Borbur Municipality of the Boyacá District of Colombia, 245km north from the capital city (Bogota). The area around the project is composed of river valleys flanked by low to medium-sized mountains. Typical elevations do not exceed 2,000m above sea-level. The project is accessed via a paved road from Bogotá to Muzo stretching for 182km, with the remainder of the journey via a combination of dirt and paved roads. The entire journey from Bogota takes around 6 hours by a 4×4 car. Several villages occur within the immediate vicinity of the Project, where inhabitants have a history of small-scale artisanal mining at Coscuez. These villages already supply a
significant proportion of the workers for Coscuez and the surrounding mines, suggesting that the local areas should be sufficient for most future mining operations. 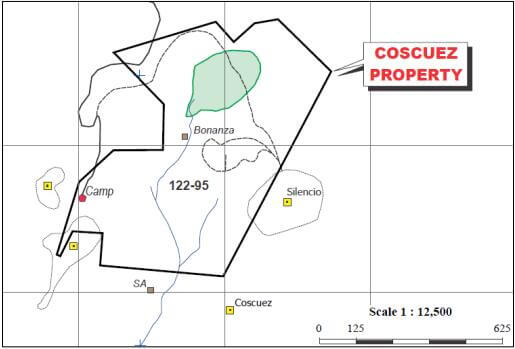 The Coscuez Mine is served by the electricity network of Boyacá which supplies energy to the mine. The Boyacá network supplies electricity to a substation where it is distributed from underground substations to satisfy mine lighting, hoist operations, ventilation, mine camps, and other activities.

The Coscuez Mine is historically one of the world’s most significant emerald mines, having been in operation for over 400 years and has produced some of Colombia’s finest emeralds. On 30th October 2017, FURA has agreed to purchase 76% of the issued and outstanding shares of Esmeracol S.A. which owns 100% interest in the 122-95M (The Coscuez Emerald Mine).The 122-95M covers an area of 46 hectares and includes exclusive rights for the exploration, construction and mining of emerald deposits granted by the Government of the Republic of Colombia.

Emeralds occur at Coscuez within calcite veins and breccia units that cut Early Cretaceous carbonaceous black shales of the Muzo Formation, the same host rock as the Muzo Mine and other emerald occurrences in the region. Thrust faults, strike-slip faults and associated folds provide the structural setting for the emerald hosting calcite veins and breccias. The Coscuez Mine occurs on a southwest plunging anticline, where northnortheast strike slip motion of the relatively easily deformed black carbonaceous shales has resulted in stacked thrust fault slices, and complex folds.

The current operation at 122-95M, has reached the orebody through a significant number of horizontal accesses of different dimensions, which total more than 40 km of measured tunnels. Within the orebody, vertical shafts have been developed to delineate the extraction blocks for the operation, complemented by established and controlled watering and ventilation system.
Fura, as a short-term plan, will immediately focus on improving the mine’s infrastructure, developing safe and effective operations, including the construction of a 1/7 gradient, positive and negative ramp system, complemented by horizontal tunnel construction to optimise access to the orebody, which will allow modernising the extractive process and converting the mine into a safer operation. Fura believes that it will ramp up the emeralds production with all the plans coming together. 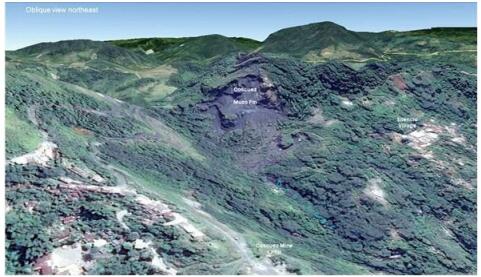 Contemporaneously with the finalisation of medium and long-term plan, Fura will also work for the necessary approvals for the technical plans such as design of the new decline, entrance of the tunnel, washing plant, waste dump design and other necessary areas.

1. Chemical Analysis: At the mine a lot of exploration work has been completed and we have XRF and ICP-MS geochemical data has been compiled.
2. Moisture Analysis: Although we have some sample Moisture analysis, we need to have a detailed understanding of the moisture content and heating weight losses for the dried feed to the Optical Sorting machine. This is critical for a porous rock like carbonaceous shale, which is the host rock for the emeralds. An analysis protocol like Coal/Coke needs to be followed.
3. Granulometric Analysis: Apart from that is some data has already been collected for the size analysis separately for the mud tank – 2 mm tailing and some small sample analysis for the feed at the ore stockpile. The results for these two data have been attached with this document. Some visual estimate data is also generated but needs to be validated with more data. As understand more data needs to be generated and we will work on this
and send you to have some sample size analysis done for a 50 kg sample size at the laboratory.
4. We understand the brecciated and sheared carbonaceous shale would have low resistant to abrasion and would generate a lot of fines. This operation test is very important especially considering the ore when moved within the bin, vibratory feeder and drying section before being fed to the optical sorting machine. So, Los Angeles test or some similar abrasion for testing aggregate toughness and abrasion characteristics.

8. OS Reject at Stockpile
The big size rocks (>60mm to <100mm) are stored in the top of stockpile and has a quantity generated so far of around 648 ton. The rate of generation of this Tailing Oversize (OS) Reject at Feed Grizzly is approx. 7-9 ton/day. Some rocks blocks are difficult to break and needs manual breaking or rock breaker. We normally set up a team for manual breaking the rocks (+60-100mm) and will look for rock breaker attachment for bigger (+60-100mm) rocks.

In order to have an idea of material size distribution to be considered in the plan and process design, we have tried some visual estimates of the feed information about the fraction analysis.

The mine was operating in a semi mechanised operation and the ore is mined and hauled in pushcart haulage system to move the from the mine face to the ore stockpile. The ore was then manually processed with removing the undersize and checking for the emeralds within the rock on a table after washing it with pressurized water. Since we have taken over the operation the mining has been converted from semimechanised to mechanised operations with for introduction of small tractors/ trucks for haulage.
Please refer to the pictures in the next page for the ore at the stockpile. 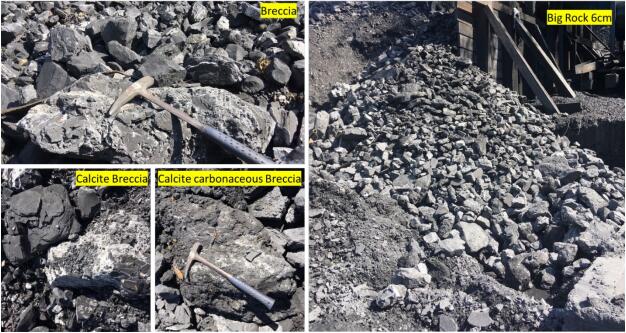 We have also introduced a trommel and three conveyor belt for operations and improve the emerald recovery system. Drawing below for the existing system and the dimensions for the trommel and details in the drawing. The current capacity of the plant is 10 to 12 tons per hour with top size feed of 60 mm.
Please refer to the pictures in the next page for the ore processing and picking of emerald at the plant. As we progress from the work sampling the operations to the large-scale mining operations the volume of the ore is going to be significantly increased at the peak of the production the monthly processing capacity is going to be 15,000 tph (tons per hour) with top size feed of 100mm. That roughly translates to 100 tons per hour. 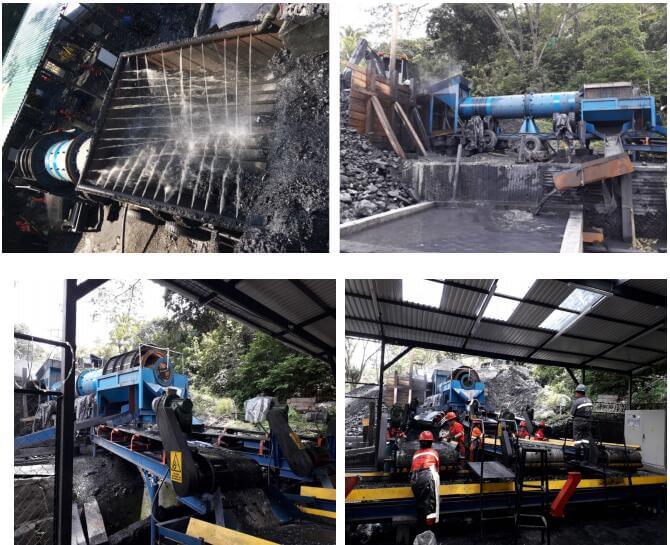 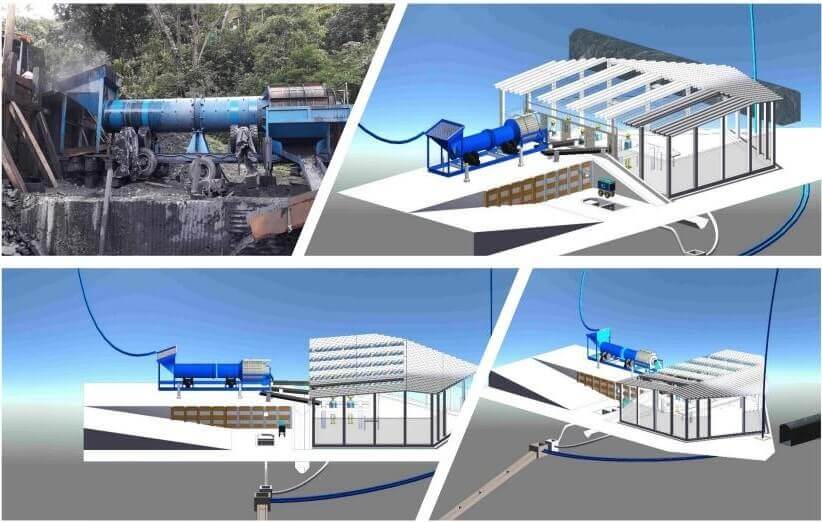 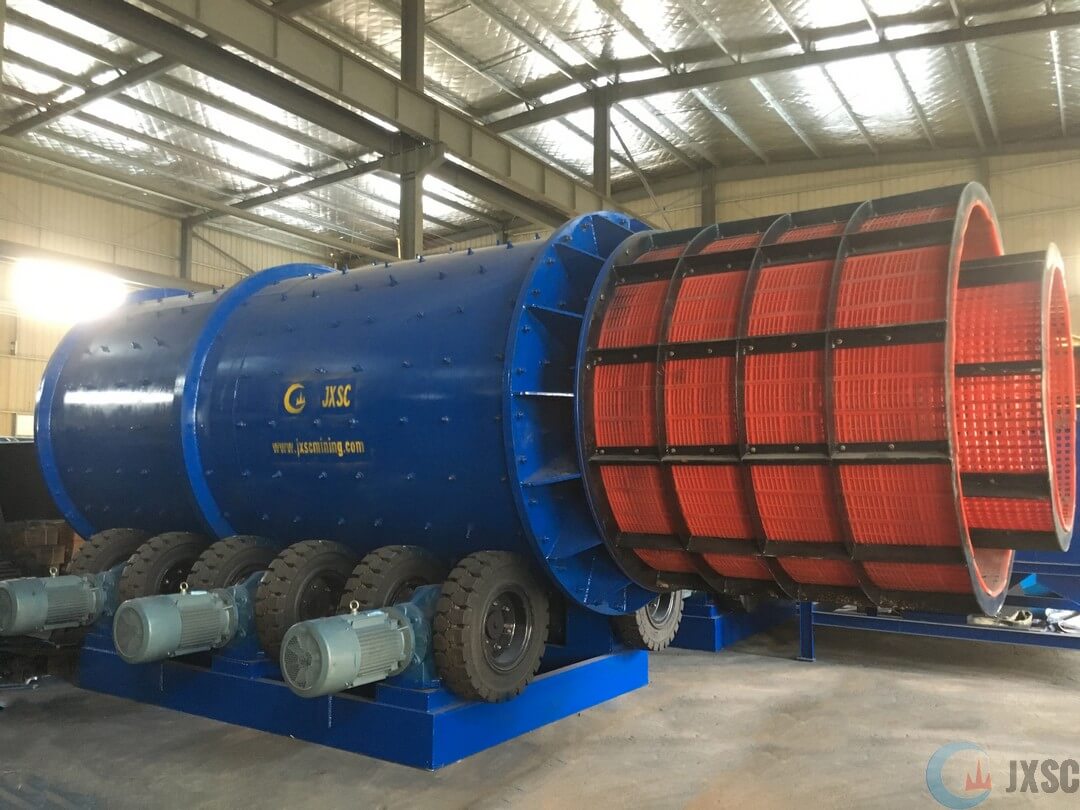 According to geomechanical zoning and rock mechanics tests, the following parameters of the rock massif were considered for analysis by the Hoek and Brown fault criterion.
UCS: 45 / Mpa GSI Geological Resistance Index (GSI) : 40 / Mi: 7 / Ei: 9300 Mpa
From the mapping carried out and the laboratory tests it was verified that the rock types in greater percentage according to the Bieniawski RMR geomechanical classification is IIIB and VAT. 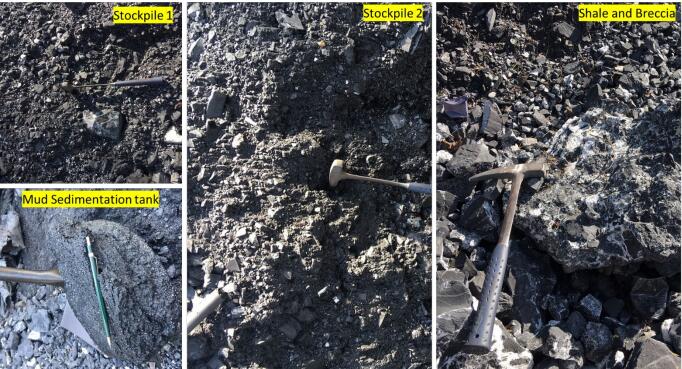 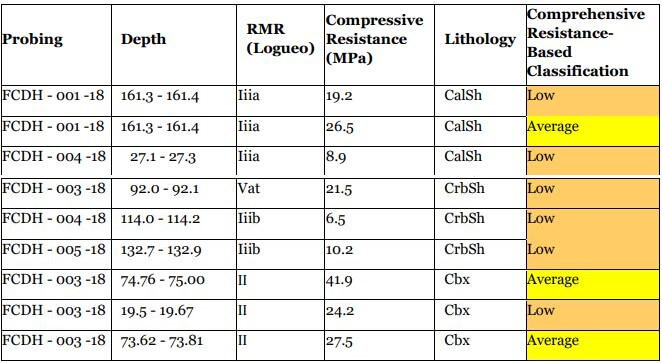 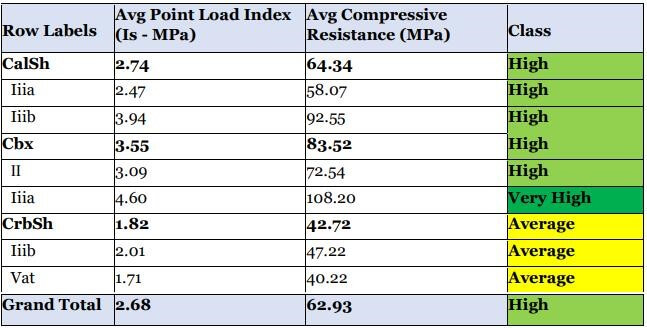 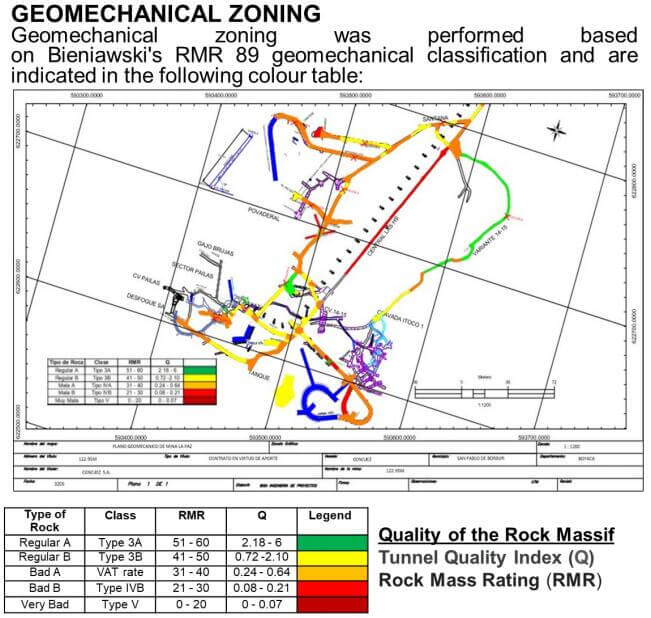 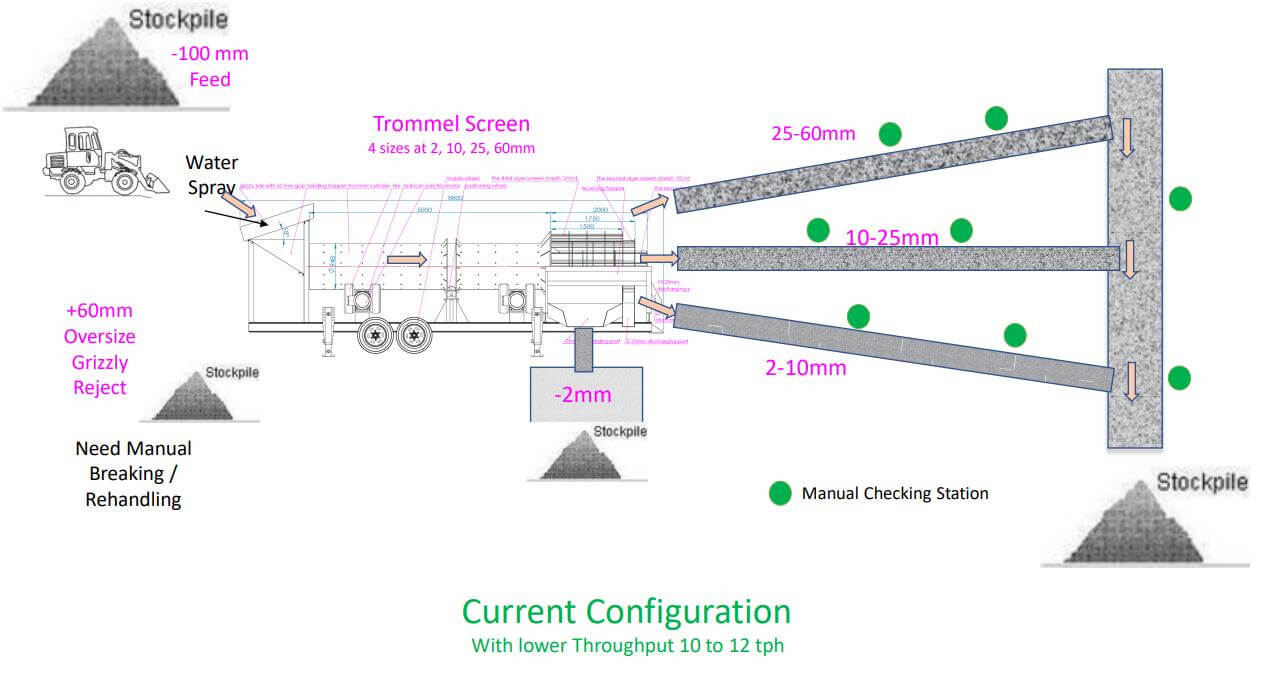 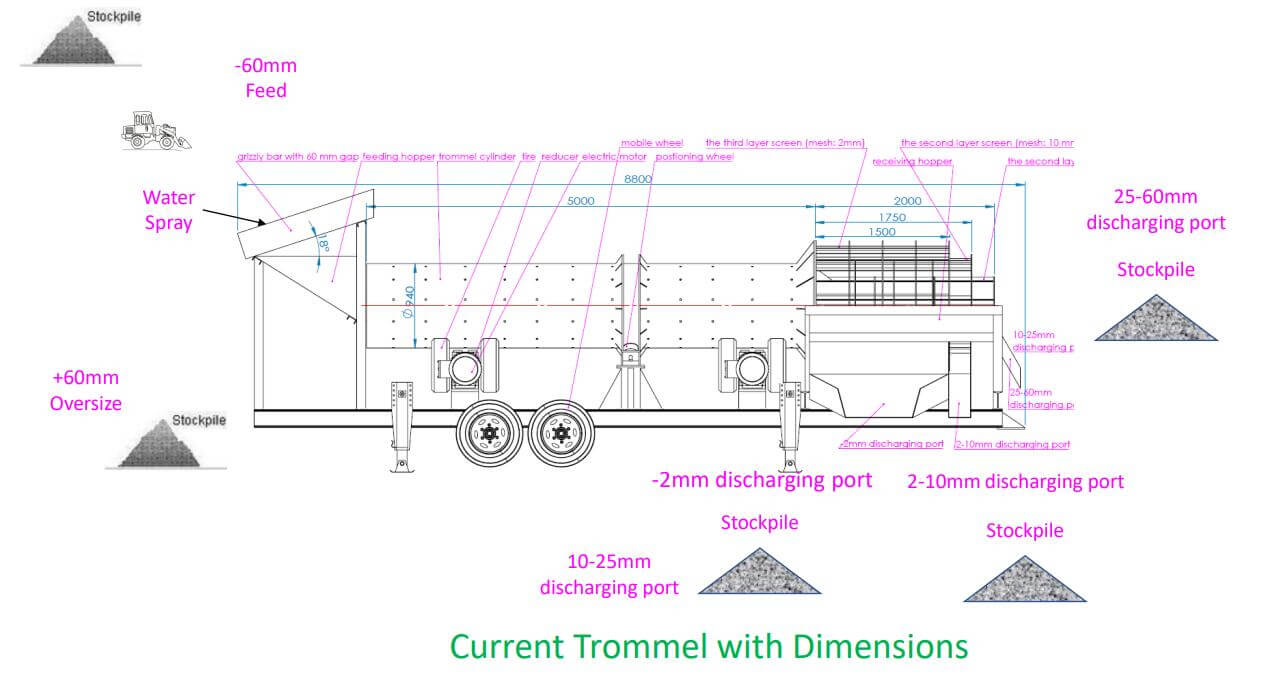 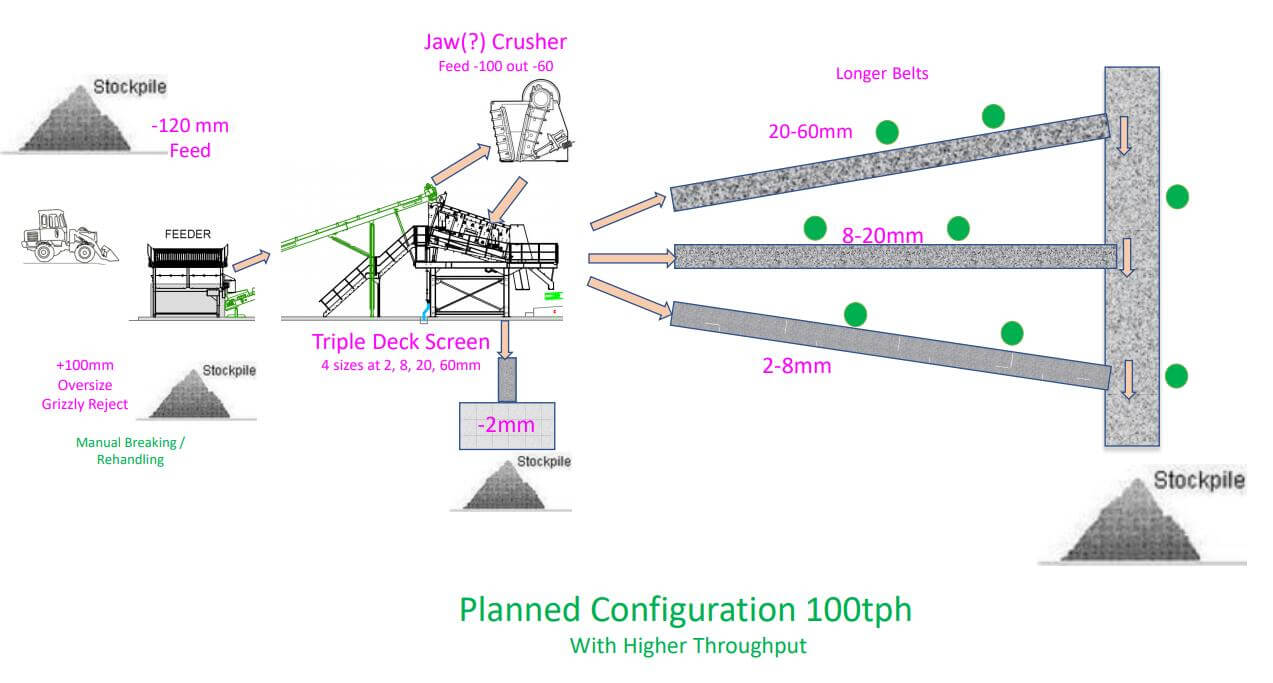 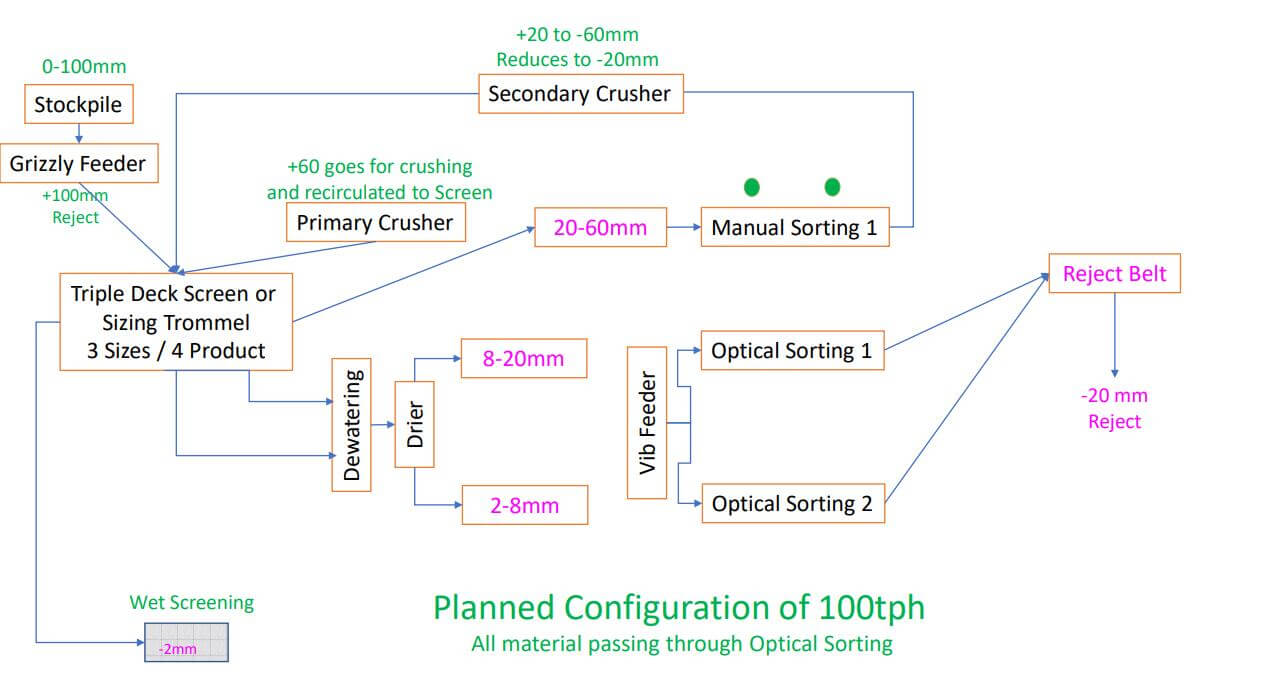 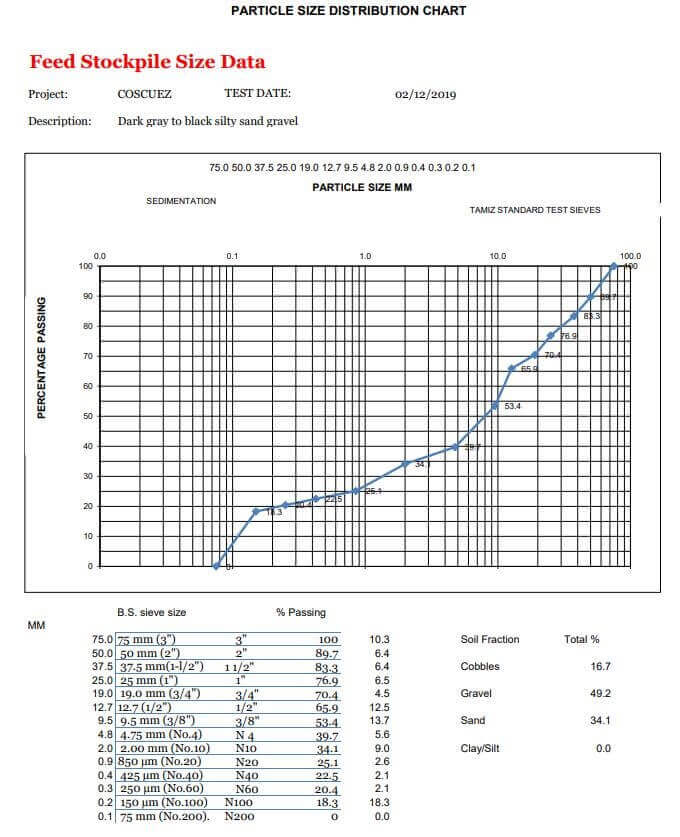 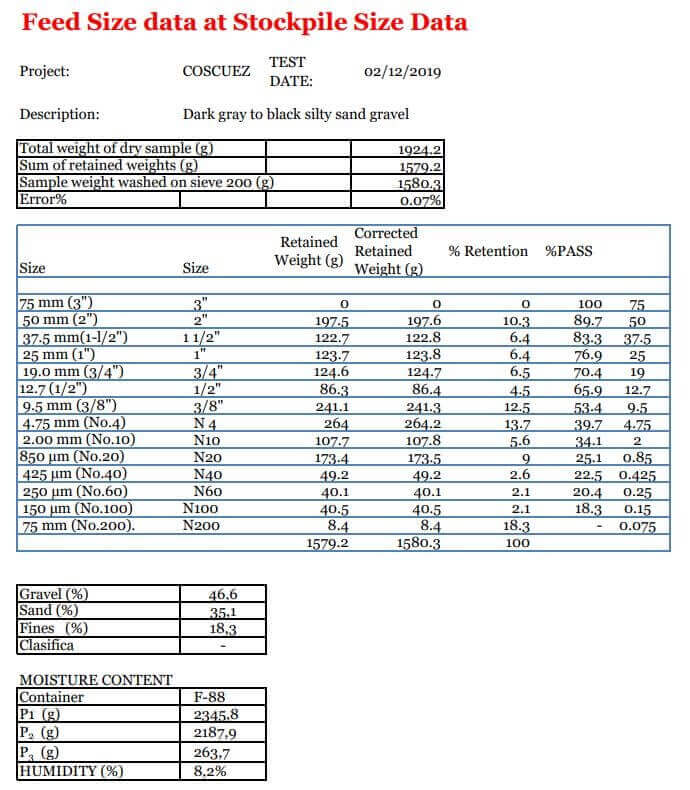 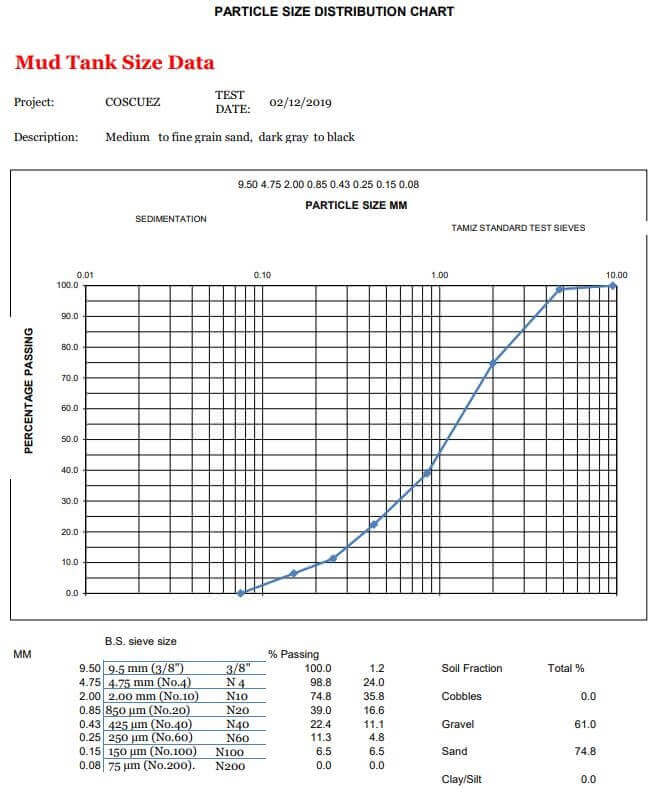