Types Of Vibrating Screen and How It Works

Home » News » Types Of Vibrating Screen and How It Works

Vibrating screen is a kind of vibrating screening mechanical equipment suitable for any particle, powder and mucus. At present, it is commonly used in China’s food, medicine, chemical industry and metallurgy industries. The vibrating screen has the characteristics of large vibration amplitude, high vibration intensity, low frequency and elastic screen surface. In the process of operation, the maximum screening force is always maintained, so that the screening efficiency is high, the processing capacity is large, and the screen replacement is convenient. According to the current manufacturers, the large screen surface and large processing strength of customizable vibrating screen can meet the production needs of different users. 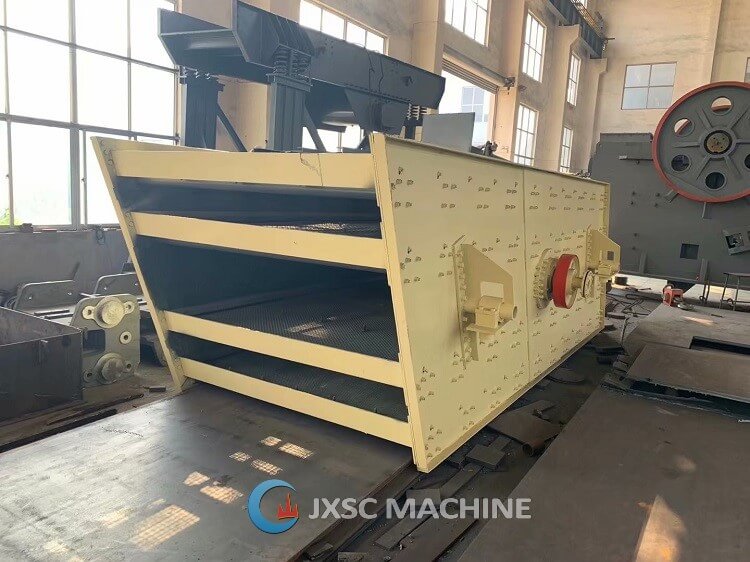 By weight and purpose

According to the running track of the material

The vertical motor is used as the excitation source, and the upper and lower ends of the motor are equipped with eccentric weights. The rotating motion of the motor is transformed into a horizontal, vertical and inclined three-dimensional motion, and then the motion is transmitted to the screen surface. Adjusting the phase angle at the upper and lower ends can change the trajectory of the material on the screen surface. Suitable for food, pharmaceutical, chemical, metallurgical and other industries.

The linear vibrating screen is driven by double vibrating motors. When the two vibrating motors rotate synchronously and reversely, the exciting force generated by the eccentric block offsets each other in the direction parallel to the motor axis and overlaps into a resultant force in the direction perpendicular to the motor axis. Therefore, the motion track of the screen is a straight line. The two motor shafts have an inclination angle relative to the screen surface. Under the combined force of exciting force and material self gravity, the material is thrown up on the screen surface and moves forward in a jumping straight line, so as to achieve the purpose of screening and grading the material. It can be used to realize automatic operation in pipeline. The utility model has the characteristics of low energy consumption, high efficiency, simple structure, easy maintenance, fully enclosed structure and no dust overflow. The maximum screening mesh is 400 mesh, which can screen out 7 materials with different particle sizes.

Swing vibrating screen is a low-frequency rotary vibrating screen imitating manual shaking. Its principle is that the instantaneous motion is the synthesis of radial displacement and circular motion with this displacement as the axis (spiral motion). The vibration exciter that can adjust the eccentricity produces nonlinear three-dimensional motion, and the material also produces the same motion similar to manual operation, so as to achieve the purpose of screening. Combined with screening accessories, more ideal screening effect can be obtained; It is suitable for spherical, cylindrical, flake and even irregular materials that are easy to block the net and need precise screening.

The high-frequency vibrating motor is used as the excitation source for the straight row screen. After the materials enter the system, they will make three-dimensional rotation on the screen surface under the force of the vibration source. The flour and caking will be fully dispersed, quickly pass through the screen and directly enter the lower surface bin. The impurities and foreign matters are separated and discharged to the slag discharge port, playing the role of “safety officer” on the production line.

The power device of this series of linear vibrating screen has two forms: direct drive of vibrating motor and indirect drive of exciter driven by ordinary motor through coupling, which can meet the needs of different environments; The screen surface has metal woven mesh, bar, casting, welding, punching and other forms. The screen surface has either single-layer structure or multi-layer layout, which can meet the requirements of different screening operations. It is used in metallurgy, mining, coal, building materials, electric power, chemical industry and other industries, especially in metallurgy industry. It is a common screening machine under blast furnace trough, coking plant, concentrator and so on.

As a professional mining equipments manufacture, JXSC always supplies the best mining products to fit your different requirements. It works well in our customers’ mining plant. Refer to vibrating screen, follow we accord transmission mode and screen layers to introduce it. 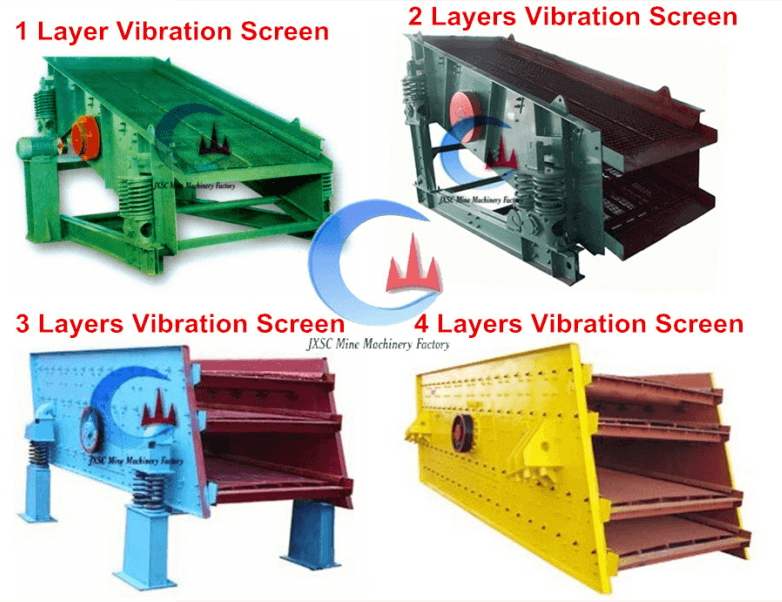