The Common Failures of Hammer Crushers

The mechanism of action is that the broken hammer shaft is lifted to a certain height through the transmission device, thereby increasing the gravitational potential energy. After the falling, the hammer head impacts and squeezes the raw coal at the bottom groove, and is crushed to a smaller particle size, which is convenient for continuous transfer of the transfer machine.
The coal mine hammer crusher can adopt two different transmission forms of pulley and reducer according to the power of the equipment. Normally, the pulley drive is only used for hammer crushers up to 250 kW, and hammer crushers larger than 250 kW are driven by reducers. 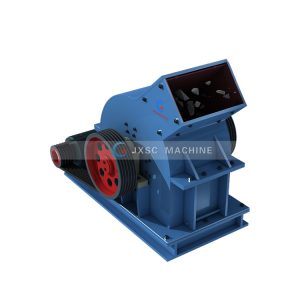 (1) Design processing defects. The design should ensure that the structure of the equipment is stable and the dynamic characteristics are good. Unreasonable mechanical construction will lead to local stress concentration in the hammer crushers, affecting the dynamic characteristics, and thus may cause undesirable phenomena such as forced vibration or self-excited vibration.
(2) Installation, commissioning, and maintenance procedures. In the installation, commissioning and maintenance stages of the hammer crusher, the installation of each spare part may be misplaced. The coordination and installation positions of the shaft system in the transmission system are not suitable, the adjustment of the geometric parameters of the whole equipment is not in place, the installation position of the moving cone is unreasonable, etc., and then It may cause problems such as large equipment load and poor stability of the running state.
(3) Human error. In the process of human operation, the equipment is abnormally opened, closed and the speed is not properly adjusted. The hammer crusher runs beyond the design working condition for a long time, the equipment lacks maintenance, and the lubrication between the various components is insufficient. It is also a factor causing the hammer crusher to malfunction.
(4) Wear and deformation of the components. The hammer crusher runs for a long time, and various components are prone to different degrees of wear and deformation. Individual parts may be detached, cracked or even damaged by vibration, and the deflection of components such as moving cones may change. Parts may also be pitting or corroded by the external environment, or may wear out with other parts or be affected by vibration. Uneven settlement of the location; at the same time, the gap between the individual parts increases, the looseness of the fit, the friction of the mating surface decreases, etc., which will affect the normal operation of the hammer crushers.

The vibration and moving cone action of the hammer crusher will cause the moving cone to wear, which will cause the center of gravity of the moving cone to shift to form an eccentricity, resulting in an unbalanced moving cone.
The problems caused by the imbalance of the hammer crushing motor cone are:
(1) The moving cone produces an eccentricity, which changes the force state of the rotor to make it unevenly stressed. During the rotating motion, the moving cone repeatedly bends. When the fatigue limit is reached, damage or even breakage may occur.
(2) The moving cone is unbalanced, the equipment is out of the design working condition, and the vibration is caused by severe vibration, which interferes with the external environment.
(3) During the working process of the rotor, deflection due to uneven force, friction with bearings or other adjacent components not only causes wear of various components in the equipment, but also affects the working efficiency of the equipment. It is a serious safety hazard and should be strengthened. Inspection and timely disposal.

In a rotor system connected by a coupling, misalignment between the two rotors causes the coupling to deflect, and the bearing that is connected is affected by the rotor misalignment, which shortens the service life, affects the oil film stability of the sliding bearing, and the overall operation of the bearing. Poor, resulting in more serious irregular vibrations. The monitoring of rotor misalignment should be increased, and the vibration amplitude and phase stability should be detected.

The rotor system of the hammer crushers is affected by factors such as rotor misalignment, bending of the shaft, looseness of the foundation, wear of the bearing, improper assembly, etc., and friction or even rubbing phenomenon with the bearing. Although the torque that the rotor is subjected to during operation of the equipment can be balanced, the rotational speed is greatly affected, the rotor system is also unstable, and the overall stability of the equipment is degraded. Main performance: First, the rotor system vibrates, and second, the rubbing has an impact on the rotor itself. The two overlap each other, resulting in more complex adverse reactions, such as phase reverse displacement and axial trajectory diffusion or disorder. In the design stage, in order to ensure the stability of the equipment, the gap between the rotating parts and the adjacent parts is relatively small, and it is easier to increase the probability of occurrence of rubbing.