Copper resources have the following characteristics:

Method： Massive sulfide copper deposits of volcanic origin usually contain associated zinc, mainly sphalerite or sphalerite, and these deposits contain substantial amounts of pyrite or magnetic pyrite. It is easy to oxidize during mining, crushing and grinding, and the oxidized surface can seriously affect the flotation speed of copper, zinc and sulfur minerals. In addition, some metal cations in the ore will activate the zinc-sulfur minerals and affect the recovery of copper and zinc minerals. Usually, most of the lead-zinc sulfide ore adopts the preferential flotation process. Generally, “floating lead and zinc suppression” is used mainly because galena has good floatability, and it is difficult to activate after galena is inhibited. In addition, it is found in most lead-zinc sulfide ores. The content of zinc is higher than that of lead, and “floating less and suppressing more” is often more reasonable both technically and economically. The characteristics of this type of ores are that the content of lead and zinc is relatively high, and the inlaid cloth of lead and zinc is not very close, or is not inlaid in aggregates.

Therefore, the beneficiation process and reagent system of these ores are relatively complex, including pretreatment priority flotation, copper-zinc mixed flotation and re-separation, and two-stage flotation method.

Molybdenite crystals have a hexagonal layered or plate-like structure, which is formed by the S-Mo-S structure along the interlayer paradigm bond and the polar covalent bond S-Mo in the layer. The bonding force between layers is very weak, while the covalent bonding force within the layer is very strong. Therefore, molybdenite is easily decomposed along the structural layers and produced in flake or plate shape, which is the reason for the good natural floatability of molybdenite. For the selection of molybdenite, it is necessary to avoid and prevent over-grinding. In production, it is necessary to adopt the process of stage grinding and multi-stage separation. The monomer dissociation is gradually achieved to ensure a high recovery rate of molybdenum concentrate. 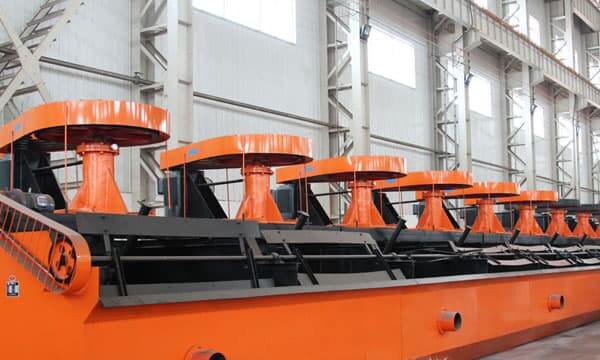 The above is the comprehensive beneficiation and recovery process of three common minerals associated with copper mines. It is important to note that accompanying minerals are an important consideration during the process. However, mineral structure, mineral intercalation relationship, and useful mineral intercalation granularity also have important influences, which need to be considered comprehensively. It is recommended to conduct beneficiation tests according to the appropriate technological process and more specific beneficiation process to avoid economic losses and waste of resources.