How to Beneficiate Oxidized Copper Ores?

Xanthate flotation after vulcanization. The method is to sulfurize oxidized minerals with sodium sulfide or other sulfurizing agents (such as sodium hydrosulfide), and then flotation with high-grade xanthate as collector. Copper oxide minerals that can be treated by vulcanization, mainly copper carbonates, such as malachite and azurite, can also be used for flotation of hematite. If silicomachite is not specially treated in advance, its vulcanization effect is very poor or even can not be vulcanized.

Fatty acid flotation method (direct flotation method), when fatty acid and its soap are used as collectors for flotation, gangue inhibitor water glass, phosphate and pulp regulator sodium carbonate are usually added. This method is only applicable to oxidized copper ore whose gangue is not carbonate. When gangue contains a lot of iron and manganese minerals, its indicators will deteriorate.

Separation flotation method can also achieve good results for refractory oxidized copper ore. It is to crush the mineral to a certain particle size, mix 0.1% ~ 1.0% salt and 0.5% ~ 2.0% pulverized coal, and heat it to about 900 ℃ in oxygen isolation. The copper in the ore will precipitate on the carbon particle surface in metal state. After oxygen isolation and cooling, the calcine will be grinded and floated to obtain the copper concentrate. This method is used to treat copper oxide minerals with more mud and difficult to separate and ores with combined copper oxide accounting for more than 30% of copper. 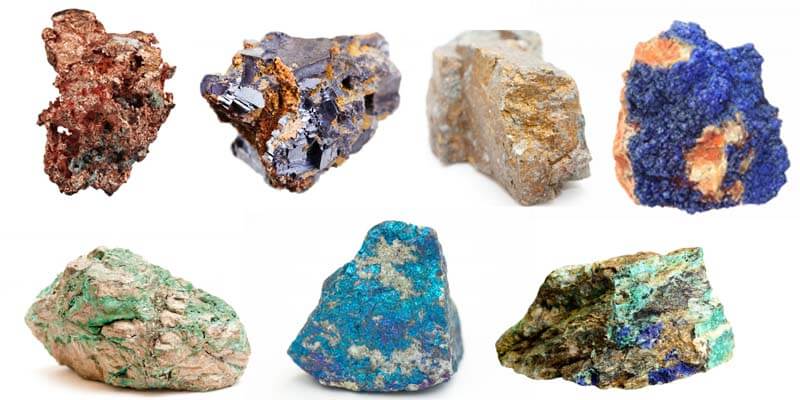 The main schemes for separating oxidized copper ore are summarized as follows:

At present, all the factories and mines that have been put into operation in China are pre sulfurized with sodium sulfide, and then separated by single flotation method. However, it is difficult to recover refractory oxidized copper ore by single flotation. In order to solve the utilization of this part of resources, many schemes have been studied. The general trend is to adopt beneficiation metallurgy combined process or metallurgical method. The same is true in foreign countries. Flotation method is mainly used to deal with easily separable oxidized copper ores, and combined process is mostly used for refractory oxidized copper ores.

The main separation objects of this ore are oxidized copper ore and pyrite. First, a single flotation process has been tried, including preferential flotation and mixed flotation processes. Practice has proved that a single flotation scheme can not be used and satisfactory indexes can not be obtained. The understanding of ore properties cannot be completed before the test. To truly understand the characteristics of the studied ore, we must finally rely on our own practice. Through practice, understanding, re practice and re understanding, it is found that under the condition of coarse grain, most of the oxidized copper ore can be dissolved in water or dilute acid, but it is insoluble after grinding. The reason is that the mine contains a lot of limestone and other alkaline gangues. After grinding, these gangues are not only unfavorable to hydrometallurgy, but also lead to the re precipitation of dissolved copper, which makes it difficult to carry out hydrometallurgy and flotation. This special law of ore is mainly due to the fact that the oxidized copper ore is located in the oxidation zone of sulfide deposit, and most of the ore and vein are weathered in powder loose form and seriously weathered. To master this Law of ore, we should make our thoughts conform to this objective external law, change the original scheme, and re formulate the following schemes:

The combined hydrometallurgy flotation process can not only improve the index of copper, but also improve the flotation of leaching residue. However, due to the high content of pyrite in the raw ore, it is difficult to separate copper and sulfur if it is directly precipitated and flotation in the leaching pulp, so the slag solution should be treated separately. Since the raw ore contains a large amount of limestone, the leaching particle size cannot be flotation particle size, but coarse-grained leaching should be adopted by taking advantage of its weathering nature. The hydrometallurgical process can be leached with water or 0.3% – 1.0% dilute acid solution. Although the leaching rates of the two are quite different, the final indexes are very close.