Gravity concentration is a proven process for mineral beneficiation. The gravity concentration techniques are often considered where flotation practice is less efficient and operational costs are high due to extremely complicated physical, chemical and mechanical considerations.

The gravity separations are simple and separate mineral particles of different specific gravity. This is carried out by their relative movements in response to gravity along with one or more forces adding resistance to motion offered by viscous media such as air or water. Particle motion in a fluid depends on specific gravity, size and shape of the moving material.

The efficiency increases with coarser size to move sufficiently but becomes sensitive in presence of slimes. There are many types of gravity separators suitable for different situations. There are many devices for gravity concentration. The common methods are manual pans, jigs, pinched sluice and cones, spiral concentrator and shaking table to name a few.

Panning as a mineral or metal recovery technique was known to ancients since centuries past. Gold panning was popular and extensively practiced in California, Argentina, Australia, Brazil, Canada, South Africa and India during the nineteenth century.

Panning is done by manual shaking of a tray containing riverbed sand and gravels, alluvial deposits containing precious metals like gold, silver, tin, tungsten etc. The shaking of the tray separates sand, stones and fine-grained metals into different layers by differential gravity concentration. The undesired materials are removed. This is primitive practice at low cost and generally in practice at small scale by the local tribal people. 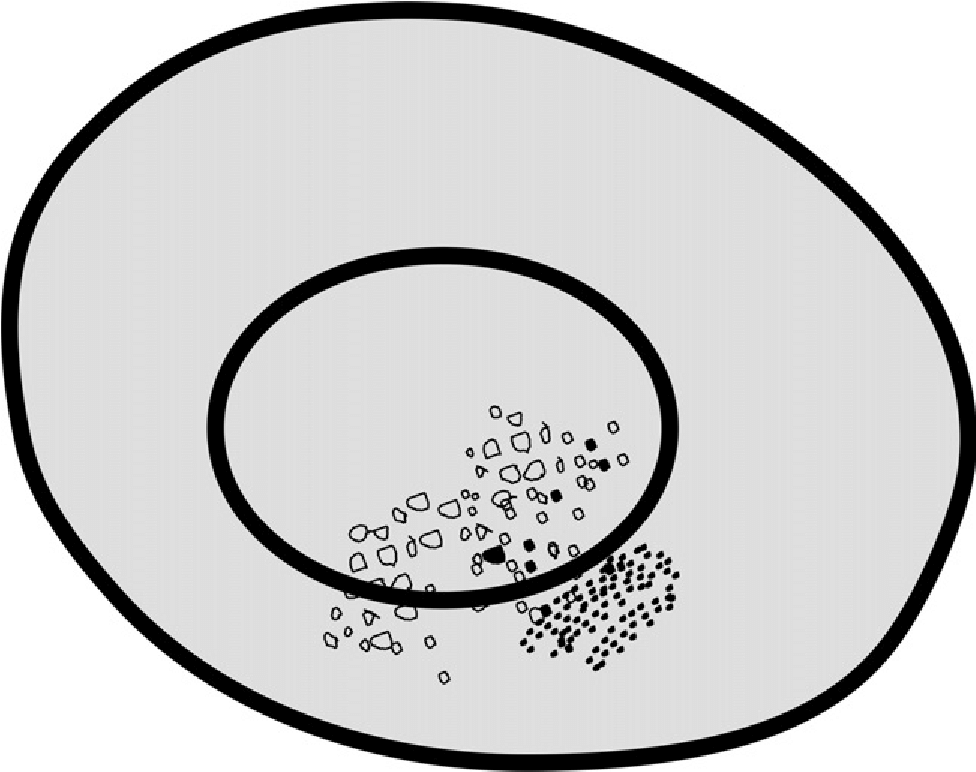 Jigs are continuous pulsating gravity concentration devices. Jigging for concentrating minerals is based exclusively on differences in the density of the particles. The elementary jig is an open tank filled with water. A thick bed of coarse heavy particles (ragging) is placed on a perforated horizontal jig screen.

The feed material is poured from the top. Water is pulsated up and down (the jigging action) by pneumatic or mechanical plunger. The feed moves across the jig bed. The heavier particles penetrate through the ragging and screen to settle down faster as concentrate. The concentrate is removed from the bottom of the device. Jigging action causes the lighter particles to be carried away by the cross flow supplemented by a large amount of water continuously supplied to the concentrate chamber.

Pinched sluice and cones is an inclined trough made of wood, aluminum, steel and fiberglass, 60-90 cm long. The channel tapers from about 25 cm in width at the feed end to 3 cm at the discharge end. Feed consisting of 50-65% solids enters the sluice and stratifies as the particles flow through the sluice.

The materials squeeze into the narrow discharge area. The piling causes the bed to dilate and allows heavy minerals to migrate and move along the bottom. The lighter particles are forced to the top. The resulting mineral strata are separated by a splitter at the discharge end. Pinched sluices are simple and inexpensive devices. It is mainly used for separation of heavy mineral sands. A large number of basic units and recirculation pumps are required for an industrial application.

The system is improved by development and adoption of the Reichert cone. The complete device is comprised of several cones stacked vertically in circular frames and integrated. 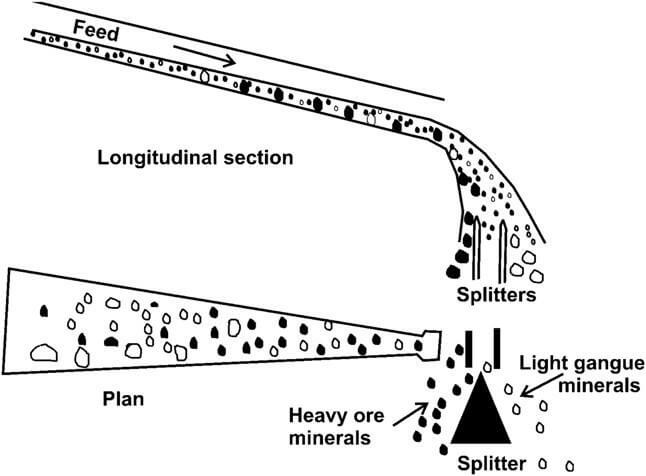 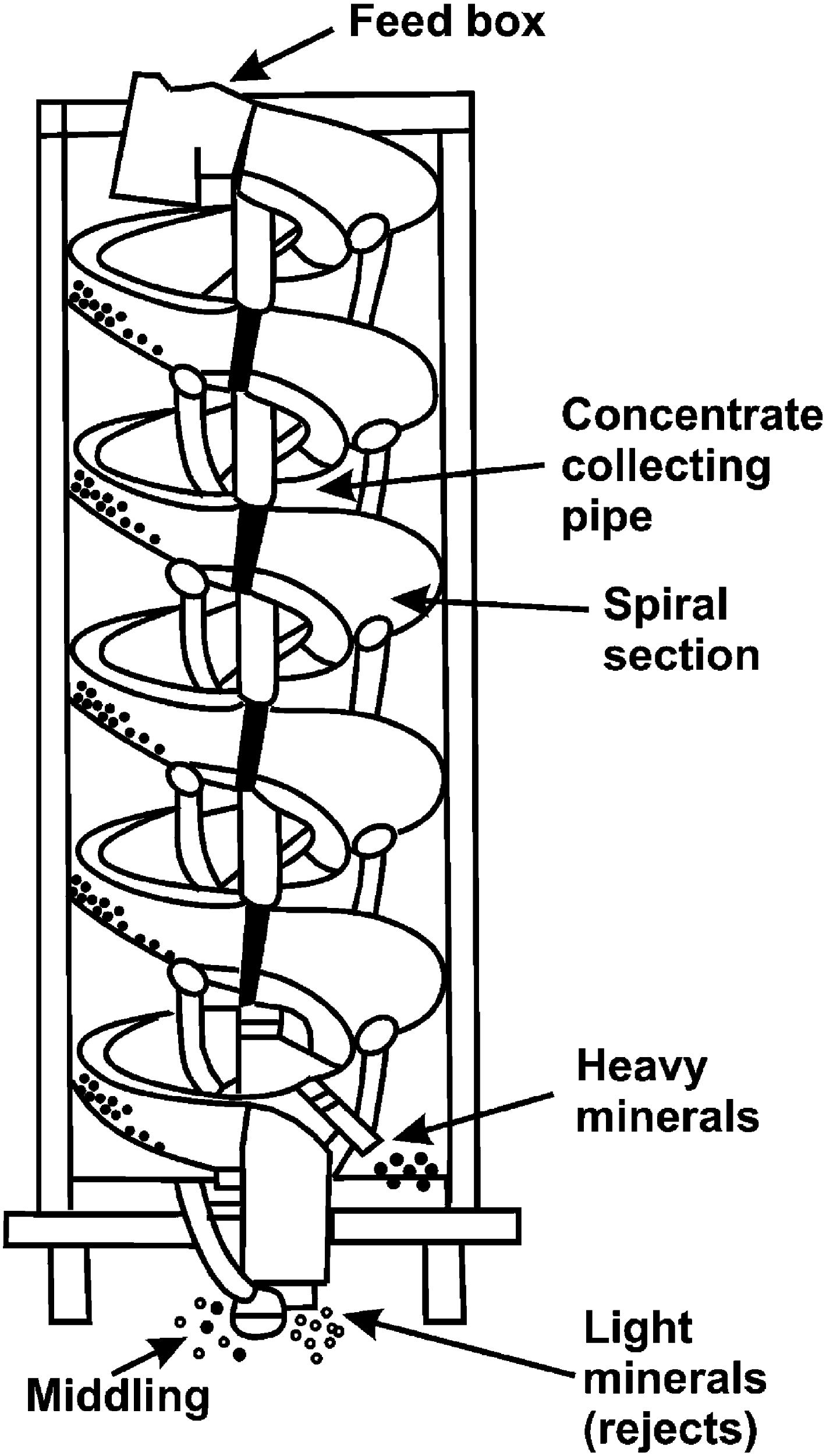 Spiral concentrator is a modern high-capacity and a low cost device. It is developed for concentration of LGOs and industrial minerals in slurry form. It works on a combination of the solid particle density and its hydrodynamic dragging properties.

Spirals consist of a single or double helical conduit or sluice wrapped around a central collection column. It has a wash water channel and a series of concentrate removal ports placed at regular intervals along the spiral. Separation is achieved by stratification of material caused by a complex combined effect of centrifugal force, differential settling and heavy particle migration through the bed to the inner part of the conduit.

The most extensive application is treatment of heavy mineral beach sand consisting of monazite, ilmenite, rutile, zircon, garnet etc. It is widely used to upgrade chromite concentrate. Two or more spirals are constructed around one central column to increase the amount of material that can be processed by a single integrated unit.

Shaking table consists of a sloping deck with a rifled surface. A motor drives a small arm that shakes the table along its length, parallel to the rifle pattern.

This longitudinal shaking motion drives at a slow forward stroke followed by rapid return strike. The rifles are arranged in such a manner that heavy material is trapped and conveyed parallel to the direction of the oscillation. Water is added to the top of the table and perpendicular to the table motion. The heaviest and coarsest particles move to one end of the table. The lightest and finest particles tend to wash over the rifles and to the bottom edge. Intermediate points between these extremes provide recovery of the middling (intermediate size and density) particles.

Shaking tables find extensive use in concentrating gold. It is also used in the recovery of tin and tungsten minerals. These devices are often used downstream of other gravity concentration equipment such as spirals, Reicherts cones, jigs, and centrifugal gravity concentrators for final cleaning prior to refining or sale of the product.

Multi-gravity separator (MGS) is a new development in flowing film concentration expertise which utilizes the combined effect of centrifugal force and shaking. Centrifugal force enhances the gravitational force and obtains better metallurgical performance by recovering particles down to 1 mm in diameter. It would otherwise escape into the tailing stream if other conventional wet gravity separators like jigs, spiral, table etc. are used.

The principle of the system consists essentially in wrapping the horizontal concentrating surface of a conventional shaking table into a cylindrical drum and then rotates. A force, many times greater than the normal gravitational pull, is exerted by this means on particles in the film flowing across the surface. This enhances the separation process to a great extent. MGS in close circuit with lead rougher cells of graphite schist-hosted sulfide ore improves the lead concentrate metallurgy from 20 to 40% Pb. Graphitic carbon content reduces simultaneously from >10 to less than 3%. Presence of graphitic carbon interferes with the flotation of sulfide ore resulting in low metal recovery and unclean concentrate. MGS improves the metallurgical recovery and quality of concentrate for graphite carbon bearing sulfide ore and high alumina-bearing fine iron ore.