Two billion years ago, a giant star meteorite with a diameter of 5 to 10 kilometers entered the atmosphere and hit the earth in southern Africa. Fortunately, there was only some simple early life on the earth that could do photosynthesis. But it still left its mark on the earth, which is today in the Vredefort Dome in the north-central part of South Africa.

You can still find this crater now in the southwest of Johannesburg. 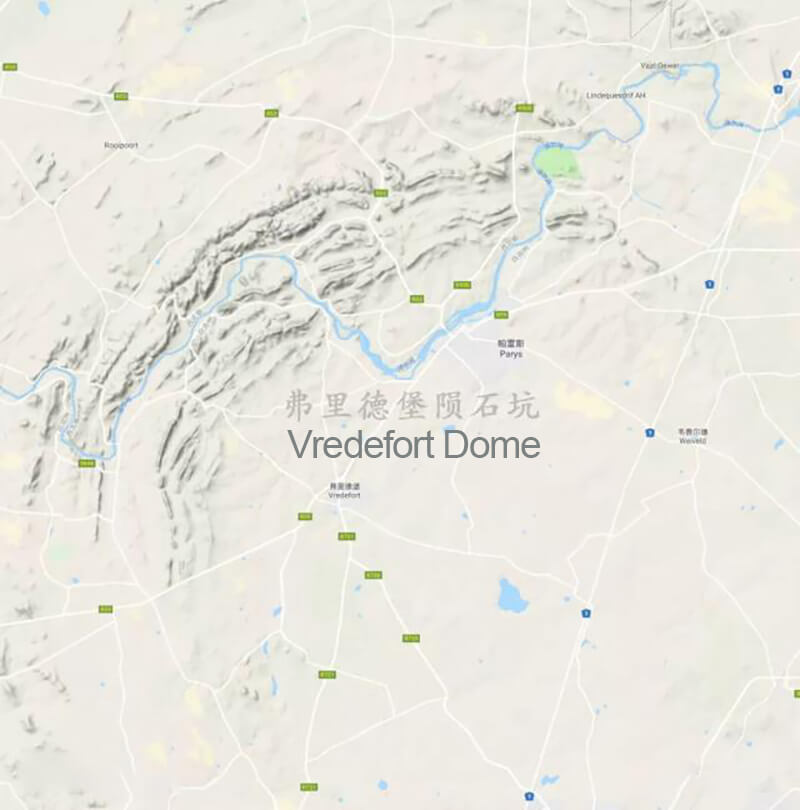 The huge kinetic energy of the meteorite caused severe vibration on the surface of the fragile crust, directly distorted the geological environment within 300 km in diameter, and turned the underground stratum up and down. A half crater was formed 25 km from the collision point, at 80-120. Several broken mountain belts were formed within the kilometer, and a volcano was formed in the collision center. Magma once again brings gold elements to the ground, while the ring-shaped mountains protect these minerals that come to the surface from weathering and erosion.

The red dot is the center of the impact, next to it is the first semi-craters, and the second layer of the northeast is Johannesburg.
Image from [email protected] 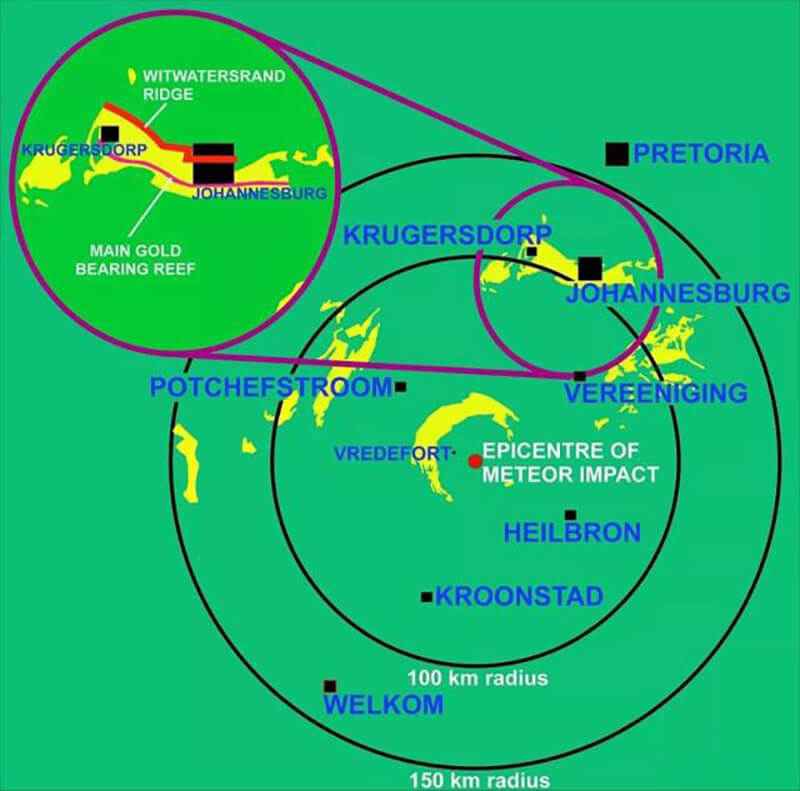 Today’s Johannesburg city site is at the foot of the crater formed by the meteorites in the northeast. That is the gift of natural power to the South Africans.

The gold belt, formed by the craton, meteorite and volcano, is known as the Witwatersrand gold belt in South Africa today. The name means “mountain with white water” in Afrikaans. The Dutch colonists who first discovered this white water mountain range did not realize that there would be gold treasures. 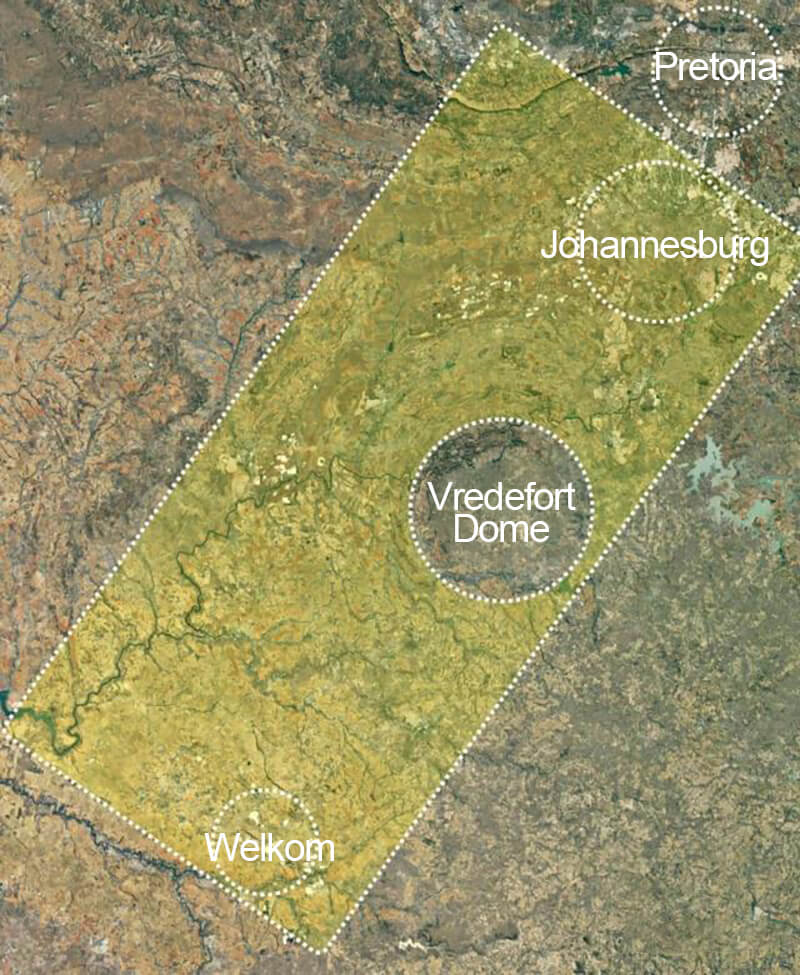 In 1852, a British miner discovered a gold mine on his farm. He privately mined and left the area after selling gold to the local government. A year later, a Frenchman found gold in the river. After reporting to the authorities, the information was sealed. But there isn’t a wall in the world which hasn’t a crack. As the news walks, more and more people come to the place to hunt for treasure. Most of them were explorers who failed in the digging in California and eastern Australia. 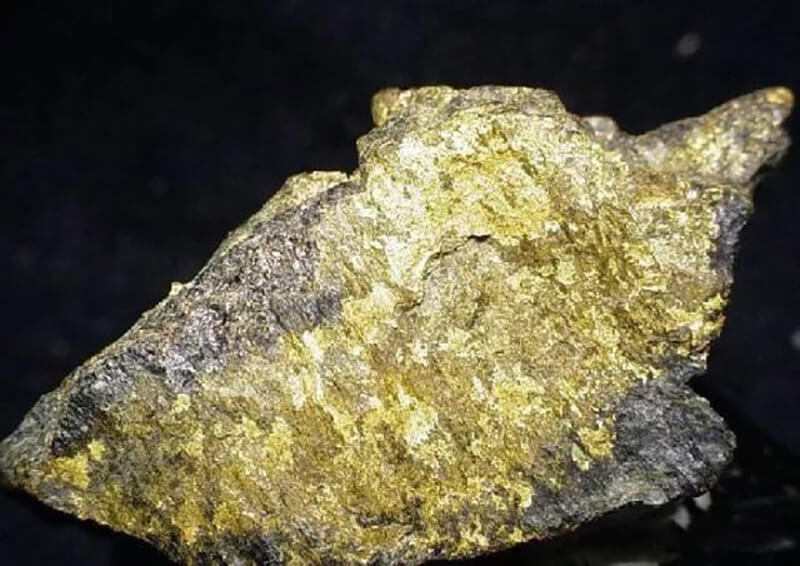 In less than a decade, Johannesburg has grown faster than the port city of Cape Town and has spawned South Africa’s first railway. Named after the two Dutch men who first settled in the mines (Johann and Johannes, the most common Dutch names of the time), the new city, and based on the city, continue to the south of the Witwatersrand gold belt expansion.

Gold production in the Witwatersrand from 1898 to 1910 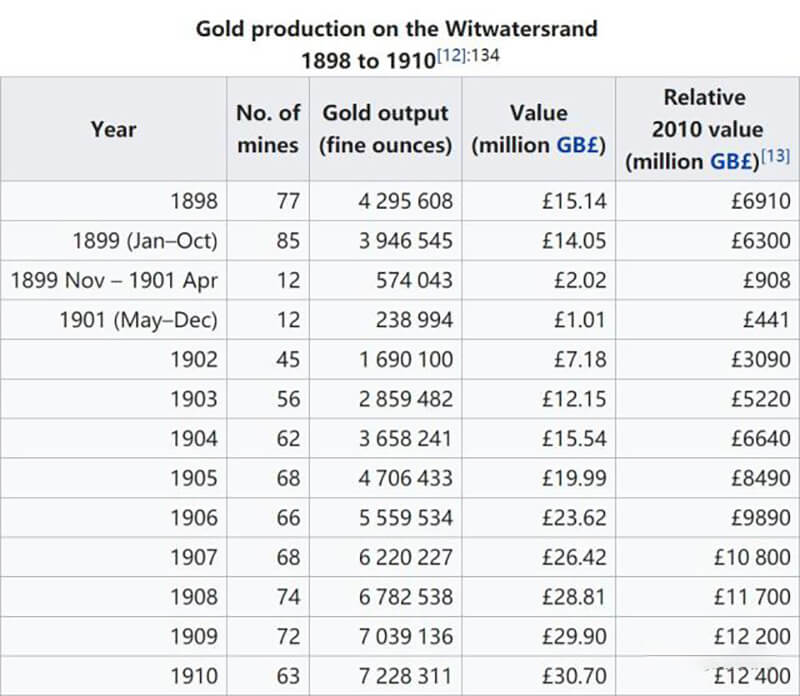 Mining is not as easy as opening a party. After all, gold left on the earth’s surface is only a few. As mining efforts continue to increase, the exploration to the underground began.

The most important old gold mine near Johannesburg is the deepest mine in the world. The deepest is 4 kilometers from the surface, and it takes more than an hour to go up and down. Miners come to the bottom of the gold mine, the temperature has reached 66 °C. They have to rely on the cooling device to cool down to about 30 °C to continue working, the production conditions are extremely difficult.

Obviously, in the colonial era, such hard work was initially done by white gold diggers. Once the investment is to go deep into the ground and mechanized, the big capital will enter, and they will choose to use the slave.

The ethnic contradictions that are important in the social conflicts in South Africa are gradually deepening in such highly unequal labor relations. 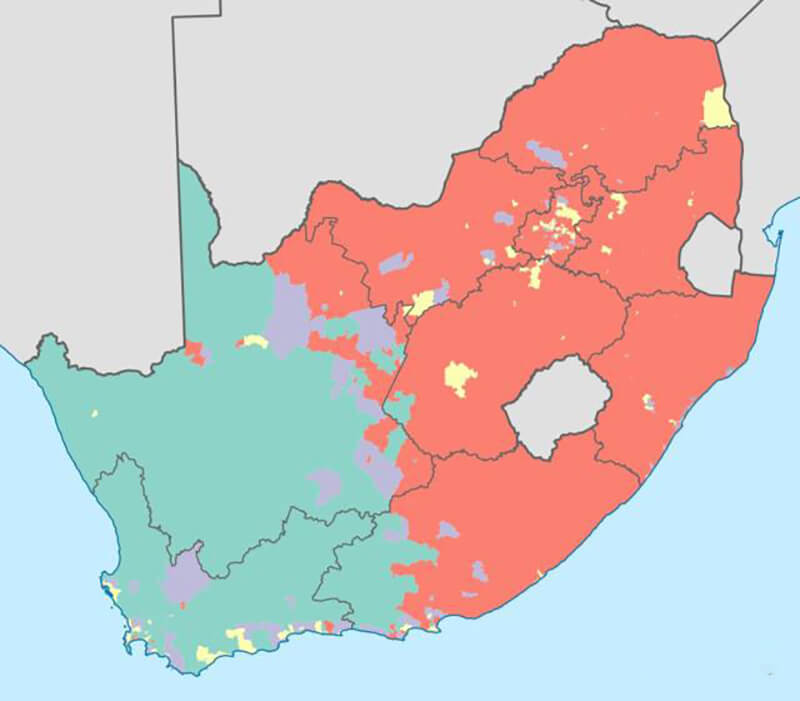 The good news is that South Africa has accumulated a lot of knowledge about metallurgy and gained wealth from it because of the early development of gold mines. Gold exports once accounted for 1/3 of South Africa’s exports, while steel, platinum and silver associated with gold mines are also important export projects. According to data released by the South African Mining Association in 2012, the mining industry provided 1 million jobs nationwide, accounting for 12% of national direct investment and absorbing 43% of foreign investment.

No African city in 1940 can compete with Johannesburg 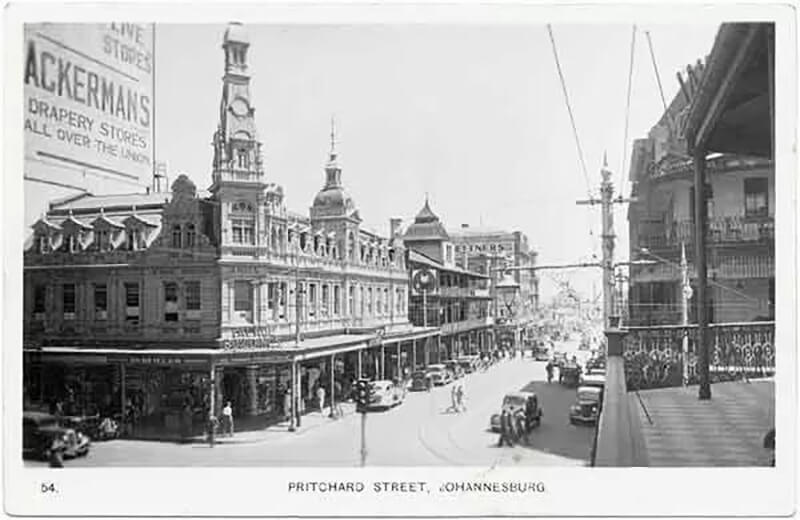 The fall of the golden kingdom

More than one hundred years of mining has allowed South Africa to harvest a lot from gold mines. But like all singular mineral industries, the South African gold mining industry is now heading for the end.

The South African Bureau of Statistics released data in early May. National gold production fell for 18 consecutive months, down 18% year-on-year, the longest contraction after the 2008 subprime crisis. Affected by this, the entire mining industry is in a downturn, total output continues to decline, and even the production of platinum group metals as the Pearl of South Africa’s industry has declined.

Gold production declines year by year
The peak of an annual output of 1,000 tons can no longer be seen. 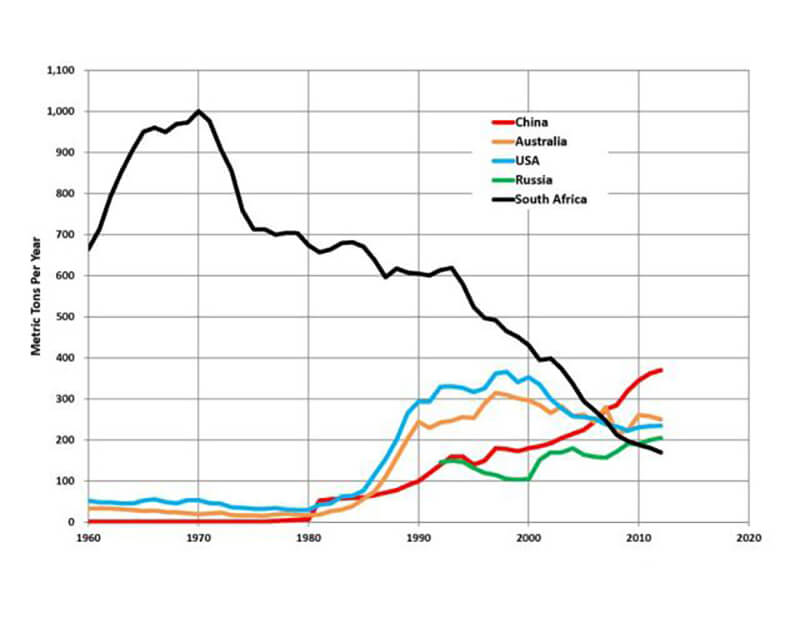 Frankly, the decline in mining capacity is not just in recent days. In 1970, South Africa mined 1,000 tons of gold, which set a new record for humans. In contrast, China ( the largest gold producer today) only can mine more than 400 tons a year, and the global gold production is only over 3,200 tons. This seems to be an inflection point. Since then, the amount of gold produced in South Africa has been declining year by year, and it has been surpassed by other major gold producing countries. 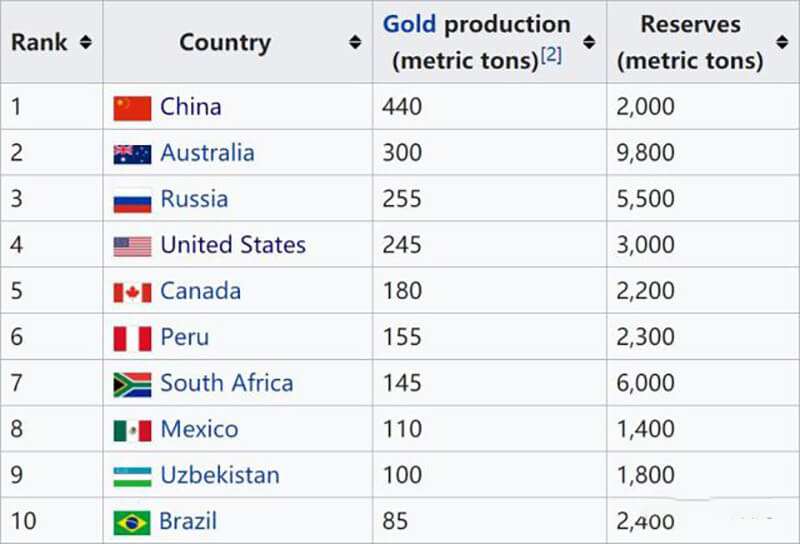 There are many reasons for the shrinking of production. The main reason is that it has been mined for more than a hundred years, even the South African Witwaterslan gold belt, which with rich gold reserves, could not carry on to be mined.

Mponeng gold mine and its surroundings 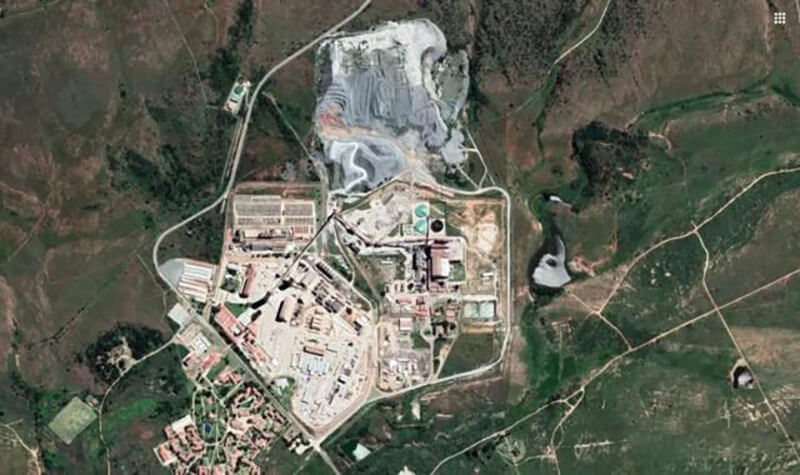 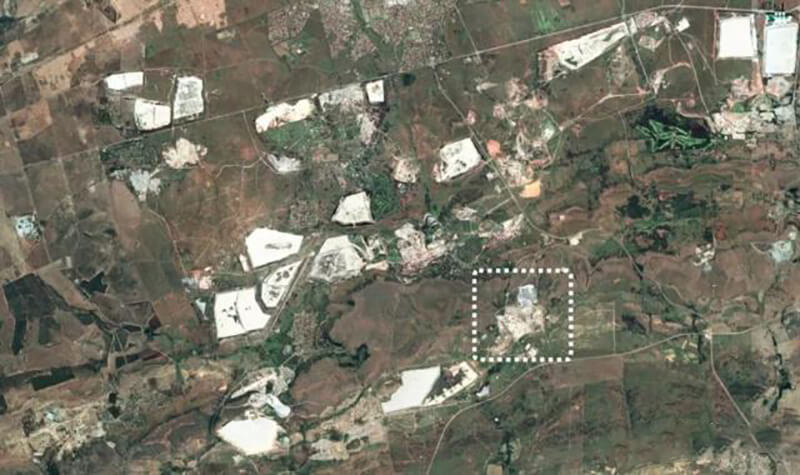 Driefontein, the old gold mine in South Africa, has recently faced a shutdown. The depth of the gold mine reached 3,200 meters. However, last year the output of this gold mine was only 300,000 ounces, which was 80% less than the peak capacity. In the face of the difficulty of refining, its owner has indicated that it will not extend the period of use.

The Mponeng Gold Mine is also a fateful one. Its owner, AngloGold, South Africa’s largest mining company, recently announced that it will sell the legendary old gold mine. They intend to withdraw from the South African gold mining industry and contract to the development of other industrial minerals. It is hoped that other companies with rich financial resources will continue the life of Mponeng.

Of course, as a multinational giant, AngloGold can’t put resources in South Africa.
As you can see from the picture below, West Africa and Brazil are clearly also important gold production places.
(Production is in ounces) 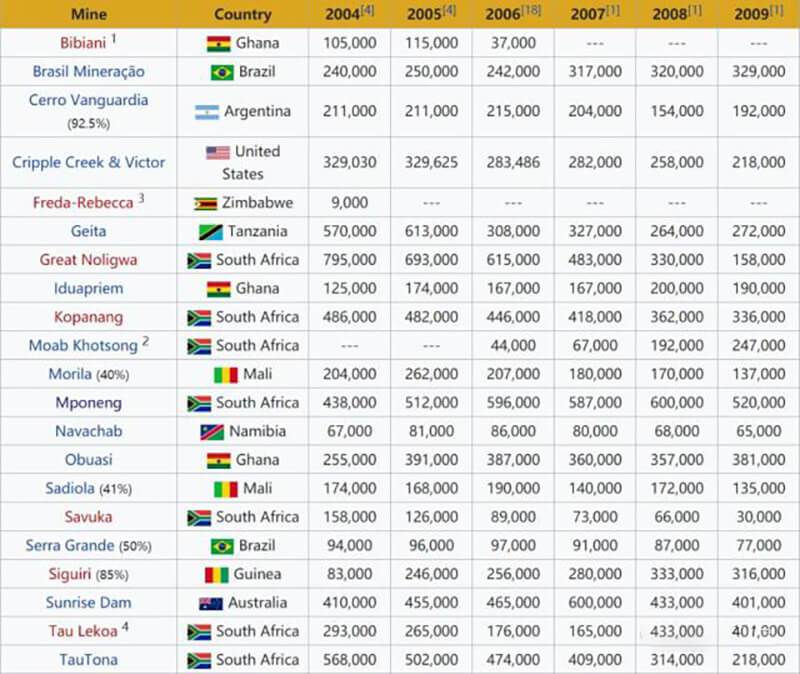 In the face of the reality of the decline in production capacity, which one of the pick-ups dare to take over?
Gold mining is a pillar industry in the South, and the debate on the ‘Nationalization of the gold mining industry’ in Congress has never stopped. Although the South African government and the ruling party said that it is impossible to nationalize, the radical left-wing party coalition is already discussing the details of licensing and franchise fees. Who knows which day the radical politicians will be in the upper position.
I have to say that they are already doing this.

The Mining and Petroleum Resources Development Act promulgated by South Africa in 2006 stipulates that if a mining company holds a mining permit for a piece of land but does not exploit it for many years, the local minerals will be nationalized and re-established. In this way, the mine owner wants to make a strategic layout in South Africa, and it is unrealistic to buy the land without mine. The profit-seeking capital is of course far from the South African mining industry.

AngloGold is already planning to withdraw from South Africa. 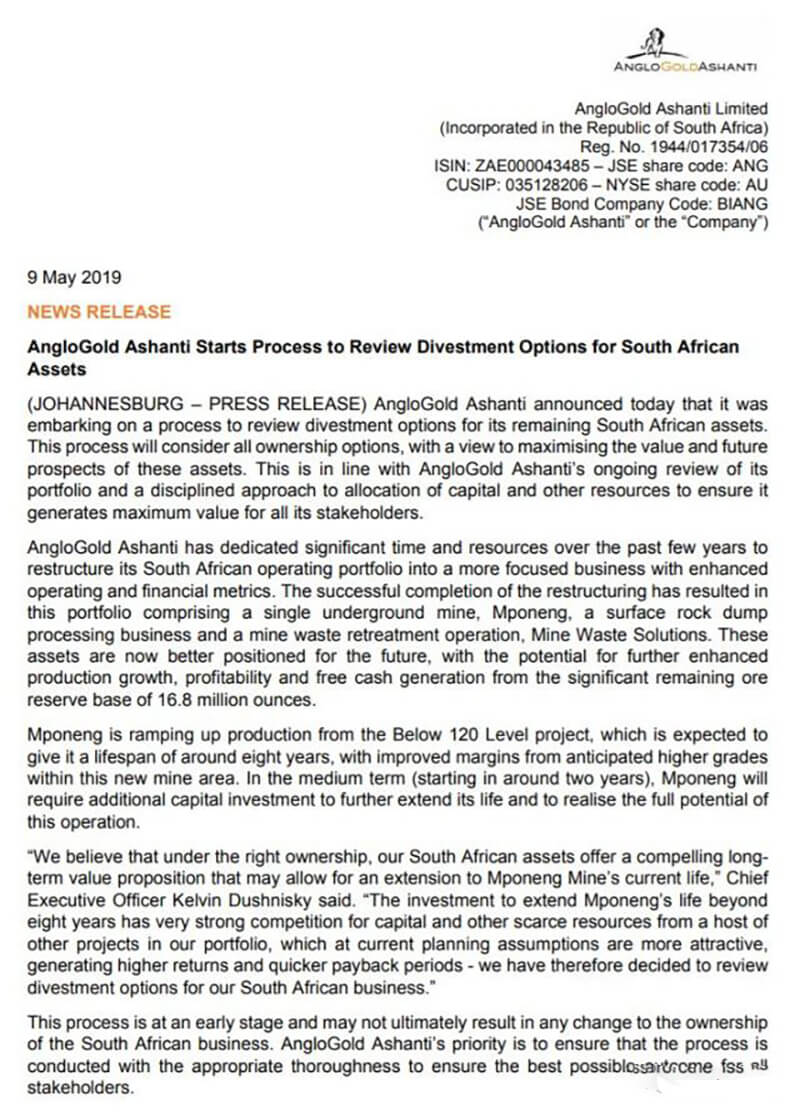 Where is this going

All of the above reasons have not only affected the power of the new capital to acquire the old gold mine, but also the confidence that affects the current gold mining in South Africa.

✨✨✨⭐️⭐️⭐️⭐️
JXSC, supply gold mining equipment around the world, trusted since 1985. If you need some info about the gold mining process, check the gold beneficiation solutions and cases.
【Extend reading】
Gold description and processing methods
Placer Gold Deposit and Mining Beneficiation
How to Separate Gold from Sands?