Review and Prospect of Global Mining Situation Since the 21st Century

Since the 21st century, global mining has fluctuated cyclically with the world economy, and China has promoted the development of world mining. The overall investment in global mineral exploration and development is insufficient, and new discoveries are reduced. The world ’s consumption of mineral products has generally risen, and demand for new energy and new materials and mineral products such as lithium and cobalt has exploded. Mining companies have shifted from large-scale expansion to asset restructuring, making investments more cautious. The mineral resources strategy has been given high attention, and the mining laws and policies have generally tightened. Looking into the future, the world ’s overall consumption of mineral products will continue to grow. South Asia will become a hot spot for mining investment. The energy revolution and artificial intelligence will promote the global mining industry to make a leap, and the conflicting interests of mining will be further escalated.

Since 2000, despite the impact of the financial crisis, the global economy has achieved overall growth driven by emerging and developing economies such as China. Global mining has experienced cyclical fluctuations with the world economy. World mineral exploration and development investment is slightly inadequate compared with the needs of economic and social development, major new discoveries are reduced, and long-term supply guarantee capabilities are affected. Consumption of bulk mineral products such as iron ore has increased rapidly, and the prices of new energy and new materials and mineral products such as lithium, cobalt and rare earth have risen sharply. Mining companies begin to divest non-core after large-scale expansion

Assets, investment in new projects is more cautious. Key minerals are highly valued by governments of all countries, and resource nationalism and protectionism have brought serious challenges to the development of world mining.

With the cyclical fluctuations of the global economy, China promotes the development of world mining

According to Hyde Clark, Kondratyev, and Schumpeter, in the long run, the global economy has undergone cyclical changes every 40 to 60 years since 1780; in the medium term, since the 19th century, A cyclical crisis occurred in 10 years. Since 2000, the world economy has entered a new cycle. The growth rates of developed economies such as the United States, the European Union, and Japan have slowed down, while developing economies represented by China have achieved rapid growth.

Mineral exploration and development has generally risen, and its proportion in the world economy remains low 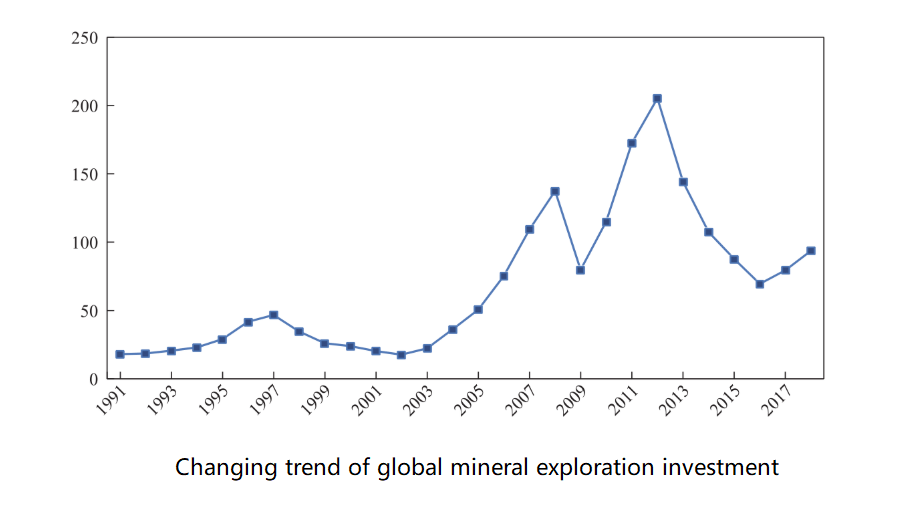 From the perspective of the country, the major discoveries are mainly concentrated in several countries including the DRC, Mongolia, Australia, Papua New Guinea, and Namibia. From the perspective of mineral types, it is mainly uranium, copper, lithium, gold, rare earth, potassium salt, graphite and other minerals. In terms of time, 2007 was the most fruitful year for global mineral exploration. In terms of scale, copper mines are found in large scale and high value. For example, the total value of the Copper Bull Gold Molybdenum mine in the United States is estimated to be as high as US $ 450 billion.

Since 2000, the global consumption of bulk mineral products has shown an overall growth trend, and China has become the main force driving global mineral consumption.

Since 2000, global mining companies’ mergers and acquisitions have experienced a cycle of rapid growth → peak → slow decline. In 2002, global mining companies’ mergers and acquisitions amounted to USD 5 billion, the lowest level in nearly 20 years, and then increased rapidly, reaching USD 95 billion in 2006, a record high in nearly 20 years. Then it quickly began to fall. Although it rebounded to 50 billion U.S. dollars in 2010, the overall downward trend has not changed, and only 2017 will be 15 billion U.S. dollars.

During the mining boom, the mining giant underwent a massive expansion, including mergers and acquisitions of companies and mining assets. However, after many years of operation, especially after the financial crisis, mining companies found that non-core assets not only did not bring profits, but caused large-scale losses to the company. To this end, the mining giants began to divest peripheral businesses and focus more on core businesses. For example, in 2010, BHP Australia (BHP) merged with South Africa’s Billiton to become BHP Billiton. However, in 2014, BHP Billiton split the assets of the former Billiton Company and formed a new company, now South32. The same is true of Brazil’s Vale. During the mining boom, the company purchased iron ore assets in West Africa and coal mine assets in Mozambique, but these two assets did not bring cash flow to the company for various reasons, but caused a large-scale reduction meter.

Morgan Stanley’s research report shows that after the 2008 financial crisis, the top 40 mining companies in the world invested more than $ 1 trillion in projects, but about one-third of the investment failed. At present, mining companies are more cautious in investing and no longer make investment decisions easily.

Since the 21st century, Chinese mining companies have gradually become an important force in mergers and acquisitions in the global mining market. In Peru, Congo (DRC), Australia, Zambia, Tanzania, Guinea, Argentina, Canada and other countries, some important mining assets have been obtained. There are successful experiences, and of course there are many failed lessons. Some mining assets are still in dispute In. Either way, China’s power has brought vitality to the global mining market.

Many factors, such as the prosperous mining cycle, the general rise in the prices of mineral products, and the spread of resource nationalism and protectionism, have forced countries around the world to attach great importance to their mineral resource strategies.

In order to strengthen environmental protection, some countries have also introduced very stringent environmental protection measures and raised standards for environmental protection. For example, El Salvador has completely banned metal mining, Zimbabwe has banned mining and has ordered the withdrawal of all permits for alluvial deposits near waters. Chile stipulates that the development of large-scale mining projects in high altitudes will be restricted by the glacier protection law. Peru will implement it from 2014 The new environmental standard is the most stringent in the world, reducing sulfur dioxide emission standards from 80 mg / m3 to 20 mg / m3 and so on. Some major projects have been blocked, such as the Pebble copper-gold mine in Alaska, the Pascal-Rama copper-gold mine in Chile, and the Rosia-Montana gold mine in Romania.

Looking ahead, with the changes in the global economic landscape, major changes in global mining are bound to follow. The author believes that the following development trends may be worthy of attention and research in the future: ①With the development of the world economy, the overall upward trend of global mineral resource consumption will not change, and the potential functions of mineral raw materials will be more explored and Applications; ② The rapid economic development of South Asian countries will attract the accumulation of capital, industry, and trade. In the future, mining in this region will become a hot spot for investment; ③ The energy revolution centered on supply diversification will make mining development free of traditional electricity supply. Restricted, independent power sources such as solar energy and wind energy will provide new solutions for mining development in remote areas; ④ artificial intelligence will bring a new revolution to the global mining industry, on the one hand, the intelligent industry will bring explosive development of new energy and new materials and minerals Demand, on the other hand, will make mining exploration and development more convenient, faster and safer, and the prospecting of mineral exploration and development will be deeper and farther; ⑤ mineral resources are closer to the national economy and national defense security, the world ’s major mineral resource countries With tighter controls, conflicts of interest among governments, businesses, and communities are more frequent.