The Most Valuable Diamond Mine

Home » News » The Most Valuable Diamond Mine

When it comes to the most abundant diamond resources, most people think of South Africa. In addition to South Africa, there is also a diamond-rich place in Europe.
The Mirny Diamond Mine (Russia) is the world’s largest diamond pit, also the most valuable diamond mine, producing 23% of the world’s diamonds, valued at 13 billion pounds!

The Mirny Diamond Mine is a huge whirlpool cave, the cave is 1200 meters in diameter and 525 meters deep, which is equivalent to 161 stories. The depth of the spiral hole has created a strong airflow between the Earth’s internal magnetic field and the air above the surface. If a light-weight small aircraft flies over it, it can be sucked into the cave by this airflow.

The value of this deposit is about £13 billion. This estimate is based on the remaining production of the mine plus the total value of the diamonds produced. It is currently the most expensive diamond mine in the world. 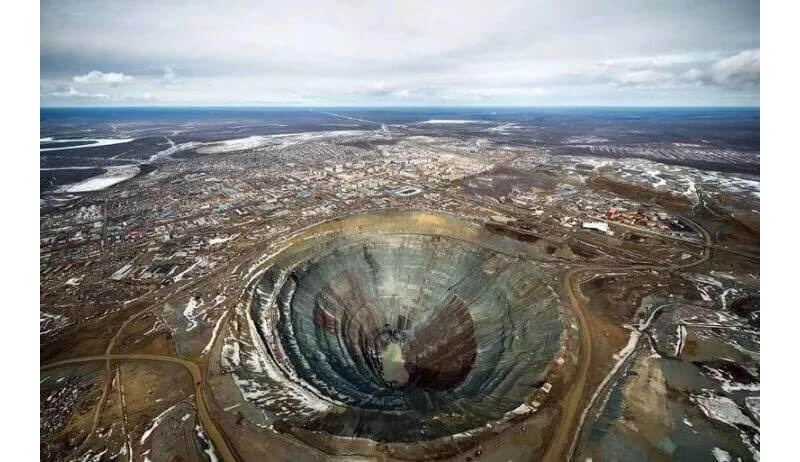 Overlooking the Mir diamond mine, huge whirlpool caves dig into the earth, how small the houses around the city are in front of the pit. 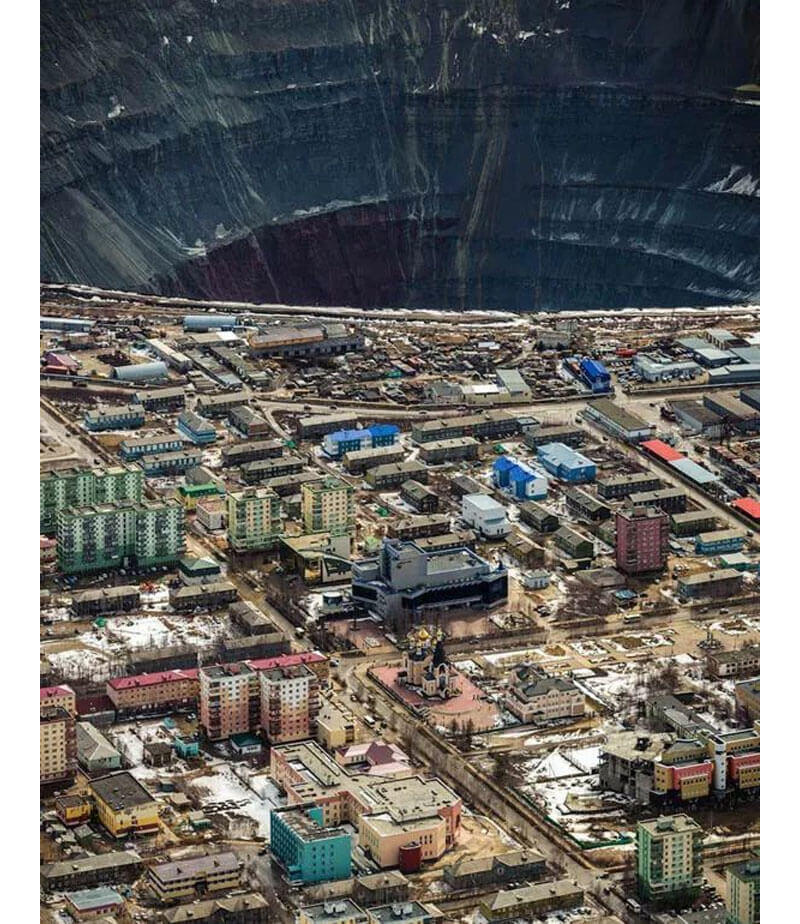 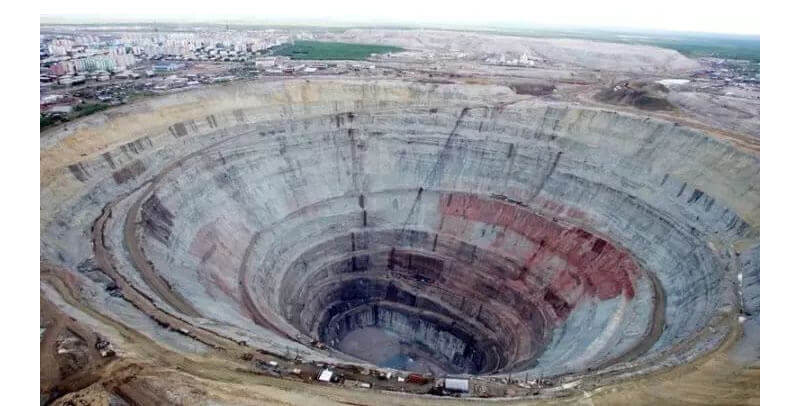 The excavation of the Mir diamond mine has to be said more than 50 years ago. In 1955, a young geographer came here to investigate and unexpectedly discovered that the area is rich in diamond resources. Subsequently, the geographer’s discovery became a state-level top secret project in the former Soviet Union. Here and several nearby mines contribute 23% of the world’s total diamonds.

While mining diamonds, the government established an administrative district in the area and in 1959 created the city of Mirny. For a long time, the city of Mirny is a mystery of Russia, which due to the confidentiality projects carried out by the state here. Mirny is located in the hinterland of Siberia, close to the Arctic Circle. It is long in winter and short in summer. The average temperature in winter is minus 40 °C, and the lowest temperature can reach minus 60 °C. Even in the short summer frost-free period, the climate here is not suitable for the growth of crops.

Most of the people living in the city of Mir are diamond miners and their families. For the past few decades, the most scarce thing for Mirny people who can see diamonds almost every day is daily necessities.
There is out of the way,There is a hydropower station and reservoir near the town of Chernyshevsky, not far from the city. When the reservoir is discharged, the two places can be navigable. In addition, Milne is 1,193 km from the nearest railway station, the only road leading to Lensk and not connected to the main road. The connection between the Mirnes and the outside world is almost entirely by air traffic. There is a large airport here, which receives more than 200,000 passengers a year and has a cargo of 25,000 tons. Inconvenient transportation plus no crops, fruits and vegetables have become the most demanding things in the local area.

During the Soviet era, the Kremlin regarded its use as the top secret. In fact, it is one of the largest open-pit diamond pits in the world. Ironically, although its Russian name is “Mirny”, meaning “peace”, the main income of the mine at that time provided a large military expenditure for the Cold War in the former Soviet Union. It is hard to imagine the difficulty of mining diamonds on this rocky, hard frozen layer. However, according to rough statistics, since the former Soviet leader Khrushchev ordered the mining of the first diamond mines in the 1950s, the “Muni” mine has so far excavated about 165 million cubic meters of rock. The local residents “holding the golden bowl to ask for food”, the future of the big pit has become a problem.

In 2004, the government decided to close the diamond cave, and the world’s largest diamond pothole, which had been in operation for 46 years, was officially stalled. The big pit has made the local government feel bad. Someone has proposed to fill it in, but the astronomical “burial fee” has allowed the government to completely abandon this proposal. It is important to know that since the mine was established, Mirne, which is rich in diamonds, has been one of the poorest places in the world.
It has been proposed to use the big pit as a tourism resource for development and utilization. However, it is 8,000 kilometers away from Moscow, and the bad weather that can freeze people’s noses in winter may not be too attractive for tourists.