The iron remover is used to remove the iron lump and iron slag from the raw material, have an electromagnetic type and permanent magnet type.
Iron remover installation: fixed suspension and belt suspension.

Magnetic pulleys, also known as magnetic rollers, are available in both electromagnetic and permanent magnets. The permanent magnet pulley has a simple structure, no power consumption, reliable work, easy maintenance, and wide application.

1 Equipment structure—Barium ferrite constitutes a multi-pole magnetic system with a magnetic wrap angle of 360 degrees, and a rotating cylinder made of a non-magnetic material is placed outside the magnetic system.
2 Magnetic system and magnetic field characteristics—When the material size of the treated material is less than 20mm, the alternating polarity is beneficial to improve the beneficiation efficiency.

4 Application
Pre-selection for big size (10~120mm) strong magnetic ore, it usually be installed after the coarse crushing operation, separates the surrounding rock.
In some concentrating plants, the magnetic pulley is installed between the fine crushing process and the grinding process, picking up part of the tailings, which can reduce the amount of ore and improve the grade.
In the operation of the hematite ore roasting, the roasting quality is controlled by a magnetic pulley, so that the ore which is not sufficiently reduced is separated by a magnetic pulley and returned to the roasting furnace for magnetization roasting. 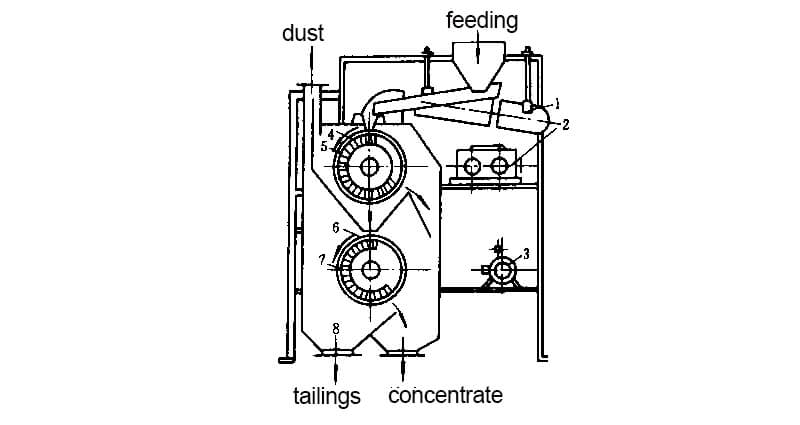 1 Structure—-The cylinder is made of 2mm FRP and the surface is coated with a layer of wear-resistant rubber. The magnetic system consists of a barium ferrite permanent magnet block with a magnetic envelope angle of 270 degrees. The polarity of the magnetic poles alternates in the circumferential direction and the polarities are uniform along the axial direction. The main reason for the use of FRP for cylinders instead of stainless steel is to prevent the drum from heating due to eddy currents.
The drum magnetic separator has two types of a single cylinder and double cylinder. The sorting length of the single-cylinder can be adjusted by the position of the baffle. The double-barrel machine can adjust the magnetic system declination to adapt to the needs of different sorting processes (concentrating or scavenging).

The wet type weak magnetic field magnetic separator has electromagnetic type and permanent magnets type, and the latter one is more often used.

Permanent magnetic cylinder magnetic separator main parts: cylinder, magnetic system, sorting tank, feeding port, discharging and overflowing part.
The cylinder can transport the adsorbed magnetic particles and prevent the slurry from immersing in the magnetic system. The cylinder and end cap are made of non-magnetic, high resistivity and corrosion-resistant materials. The tank in the magnetic field is made of austenitic stainless steel and is lined with synthetic material to prevent wear.

The magnetic desilting tank is also called a magnetic dewatering tank. It is a dressing device that combines gravity and magnetic effect, widely used in the magnetic separation process to remove slime and fine-grained gangue, and also as a concentrator before filtration.
Advantages of simple structure, no moving parts, convenient maintenance, simple operation, large processing capacity and good beneficiation effect.

The demagnetizer disperses the ferromagnetic agglomerates. The commonly used demagnetizer structure is shown in the figure below. It is a tower-shaped coil that is placed on a non-magnetic material tube and works by alternating current.
When the ferromagnetic mass passes through an alternating magnetic field whose magnetic field strength is changed from large to small, the magnetic particle has repeatedly magnetized a plurality of times, so that the magnetic energy product of the magnetic particle is smaller than once, and finally, the residual magnetism is lost.